A Book and a Chat with Alexandra Diaz 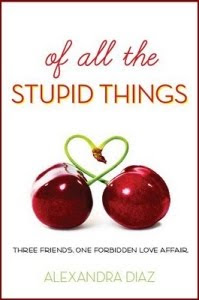 Alexandra Diaz was my special guest today on "A Book and a Chat", and what a great show it was, with almost as much laughter as there was literary content.

Alexandra grew up in a bilingual Spanish/English-speaking family in various parts of the US, but has also lived in Puerto Rico, Austria, and Britain.

Of course knowing that my guest had spent toms time in England it was a topic discussed about during the show featuring the language issues and the aspects of some of her three years she spend at Bath University completing her MA in “Writing for Young People”. The issues with being a tourist guide in Bath, and how people wondered why the water was green, to how she appeared and did not appear in two films.

Along what was a thoroughly enjoyable forty-five minutes of chat, Alexandra lead us from her literary beginnings to the production of her debut novel…

“Of All the Stupid Things”.

“When a rumor starts circulating that Tara’s boyfriend has been with one of the guy cheerleaders, the innuendo doesn’t just hurt Tara. It marks the beginning of the end for three lifelong friends.

Tara’s training for a marathon, but also running from her fear of abandonment from her father.

Whitney Blaire seems to have everything, but an empty mansion and absentee parents leave her looking for her own value in the wrong places.

And Pinkie has a compulsive need to mother everyone to make up for the mama she’s never stopped missing.

Then the new girl arrives in school and Tara starts to feel things she’s never felt for before for a girl. Can the girls’ friendship survive when all the rules have changed?”

“Of All the Stupid Things”. paints a story of reality covering issues such as lesbian relationships, to the joys and clarity of the mind that can come with marathon running, with a freshness that all will enjoy.

The inspiration behind the book cover, simple, yet one that will catch your eye, the response received and the fact that some people forget it is fiction and think the book is really about Alaexandra all were discussed during the show

The story unfolds and the lives of the characters in the book merge in such an impressive way, that you know “Of All the Stupid Things”. will be the first of a long line of successful novels by today's guest Alexandra Diaz.

The show is one you will not want to miss.

You can find out more about Alexandra and her book at:
"Alexandra Diaz - Of All The Stupid Things"

Email ThisBlogThis!Share to TwitterShare to FacebookShare to Pinterest
Labels: A Book and a Chat, Alexandra Diaz, Barry Eva, Class 2k10, Forbidden love affair, fun podcast, marathon, Must read, Of All the Stupid Things, Storyheart, YA Books, YA Literature