A Book and a Chat with Janet S Fox 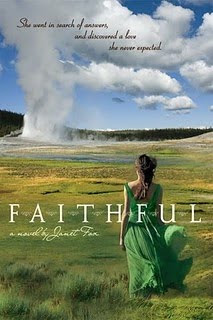 My guest on today’s A Book and a Chat is Janet Fox is another member of the wonderful 2K10 group of authors, those who have their debut YA novel coming out this year. Her book is called "FAITHFULL" and we learned during the show it is for Janet more than just a book.

Janet's mother was also a writer and encouraged her daughter at an early age to write stories. In 3rd grade she found out that you could become a writer as a profession when her teacher, I discovered that writing was a profession. I could be a writer. People would pay me to tell stories! My teacher, Mrs. Weber, secretly sent a poem I wrote to the town newspaper. This was the start, as Janet describes it...

"When my mom showed me the poem – published! With my name in the paper! – I was so excited. I have to say, it was the beginning of my career."

During the show, we learned how Janet's writing talent and been overtaken by her love of Geology amongst other things, until the death of her mother and finding of her mother’s writings, "kick started" the production of "Faithfull" Janet debut YA Novel.

From Yellowstone Park to a young girls life in 1904, all aspects of not just the book but some of Janet own views were discussed in this entertaining sixty minutes of a Book and a Chat.

It’s YA historical fiction set in 1904, with romance and mystery and a unique setting – Yellowstone National Park. An exciting setting for the story, with its deadly yet spectacular hot springs, geysers, and animals. This provides a spectacular background for the novel and enhances the experiences of the books protagonist, Maggie Bennet.

The show covered so that it is impossible to go over everything that was discussed in the sixty minutes. So why not sit back and share “A Book and a Chat with Janet Fox”

You can find out more about Janet and his book at:
"Janet S Fox- Faithfull"