A Book and a Chat with Jeri Smith-Ready 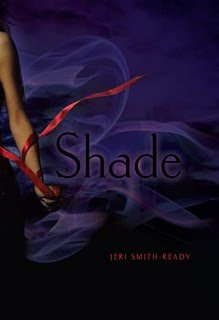 My special guest on today’s “A Book and a Chat” is author “Jeri Smith-Ready”. While Jeri has several books and trilogies under her writing belt, her new book “SHADE” is her debut venture into the realms of YA literature.

Jeri’s early plans save the earth were ruined when she realized she was more of a “problem maker” than a problem solver. This did not deter her however and her first book written in 1995/6 was about an environmental crusader-type guy fighting a coal mining company. This novel never saw the light of day and as Jeri explained she now classes it as her first “practice novel”. Her second attempt proved much more successful, though being ahead of her time with EBooks did turn her novel more into a “cult” book than actually find her overnight success.

“Requiem for the Devil” did however put the name of Jeri Smith-Ready onto the literature map. The book garnered a cult following (which is a nice way of saying only a few people read it, but those who did, loved it). This following included Stacy Boyd, who later became one of the editors for a new imprint of female-focused fantasy, Luna Books. Stacy asked Jeri to submit a proposal, and the "Aspect of Crow" series was born.

The Aspect of Crow trilogy proved to be a huge success, being soon followed by “Wonderful Game" the first book in the extremely popular “WVMP Radio Series”.
During the show Jeri shared with us her current work in progress as well as what might be happening in her other” Urban Fantasy” novel, before we started discussing her YA book “Shade”.

SHADE is a hauntingly good story and an intriguing beginning to a new series. Jeri Smith-Ready proves again why she is one of my very favorite reads! --P.C. Cast, New York Times-bestselling author of the House of Night series

The perfect combination of mystery, ghosts and romance, SHADE left me breathless. --Lisa Schroeder, author of I HEART YOU, YOU HAUNT ME

Smith-Ready writes movingly and well about music, first love and the drama of having too much responsibility thrust upon your teenage shoulders. Her world is first-rate and every one of her characters rings true. You'll want to read the next book in this exciting series immediately, but alas, you'll have to wait. --RT Book Reviews.

Jeri proved a really interesting and entertaining guest and the show is one people of all ages will enjoy. So why not sit back and listen to today's "A Book and a Chat with Jeri Smith-Ready.

You can find out more about Jeri and her book at:
"Jeri Smith-Ready - Shade"

Hi - I just found your blog...very interesting. Well done. Have a great week.