A Book and a Chat with Nicole Cushing 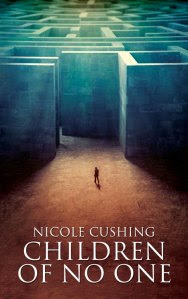 A few months ago there was an event around the blogosphere called “The Next Big Thing” where author’s blogged about their current master piece being worked on or due to be released. I did a show jumping from one of these blogs to another sharing with the listeners various “next big things” I found. Since that show I have shared shows with many of those authors whose blogs I stopped at. Today is another one of those shows as my guest on “A Book and a Chat” is Nicole Cushing.

Nicole’s “next big thing” is her stunning debut novella “Children of No One”. When you read reviews that describe the book as… “Sadism, nihilism, poverty, wealth, screams, whimpers, sanity and madness collide in Nowhere, Indiana.” You know it is something different.

While a dark novel with many characters that one would normally just despise and in fact cringe at in many places it is written in such a way that you can’t but keep turning the page. The characters are so well described you can from the words immediately picture them in your mind’s eye.

About “Children of No One”: (taken from http://literarymayhem.com)

For Thomas Krieg, Nowhere is a miles-long, pitch-black underground maze in which he’s imprisoned dozens of boys for the past ten years — all in the name of art.

For two brothers, Nowhere is the only place they clearly remember living. A world unto itself, in which they must stay alert to stay alive. A world from which the only escape is death.

But for an English occultist known only as Mr. No One, Nowhere is much more…and much less: the perfect place in which to perform a ritual to unleash the grandest of eldritch deities, the God of Nothingness, the Great Dark Mouth.

While dark it will also leave the reader thinking, and in many cases asking for more, something Nicole already has underway in her next novel currently entitled “The New God”.

So listen now and share an interesting, and entertaining show as I chat with my special guest today on A Book and a Chat with Nicole Cushing

You can find out more about my guest and their books at:
"Nicole Cushing - Children of No One"

Email ThisBlogThis!Share to TwitterShare to FacebookShare to Pinterest
Labels: Book and a Chat, Children of No One, Dark, horror, Nicole Cushing, The New God, The next big thing