A Book and a Chat with Chris Karslen 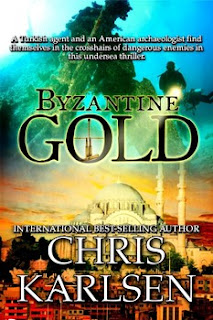 My guest today Chris Karslen is a native of Chicago, former police detective and now romantic suspense author she grew up with a love of history and books. Her parents loved traveling, a passion they passed on to her. Though her desire to write began in her teens, Chris spent twenty-five years in law enforcement with two different agencies before she decided to pursue her dreams.

Now an internationally published author, Chris has traveled extensively throughout Europe, the Near East, and North Africa satisfying her need to visit the places she read about.

Having spent a great deal of time in England and Turkey, she has used her love of both places as settings for her books. "Heroes Live Forever," which is her debut book, is set in England as is the sequel, "Journey in Time." Both are part of her "Knights in Time" series, and soon to be joined by a third novel.

Her third book, released in late 2011, "Golden Chariot," started her on the romantic thriller path, set in Turkey as described by Night Owl Reviews as…

5-Star review- As with her other books, Chris Karlsen has impeccably researched her topic. Golden Chariot is engaging and full of information and insight. I thoroughly enjoyed this smart, well-written story and am looking forward to reading more from this author. Josie--Night Owl Reviews.

This has now been followed by a second in the series which is already looking to be another hit for Chris in the form of “Byzantine Gold”.

Charlotte and Atakan, the hero and heroine from Golden Chariot are archaeologists who are assigned to work the recovery of a Byzantine shipwreck off the coast of Cyprus. Atakan is an agent with the Turkish Ministry of Culture, the investigation of artifact smuggling is one of his duties.

Prior to leaving for Cyprus with Charlotte, Atakan is seriously wounded by an old enemy he had imprisoned and is now bent on revenge. Atakan is still to be present on the wreck site but Charlotte will have to partner with another diver.

The unusual hoard of gold the wreck carried as cargo has brought a lot of publicity. It has also caught the attention of a militant cell of the PKK, a terrorist organization operating near the southeastern border of Turkey. The leader of the cell has managed to infiltrate the recovery team. His group plan on attacking the team’s campsite and stealing the valuable relics to sell on the black market. Monies from the smuggling operation will buy more weapons for the cell. The terrorist becomes Charlotte’s dive partner.

Charlotte and Atakan know the old enemy of his will strike at him again. While watching and waiting for the next attempt, the infiltration of the terrorist is discovered. Atakan and a fellow agent of the Ministry must race the clock to prevent the attack on the camp.

A great sequel to Golden Chariot” described by one reviewer as…

…another action packed thriller rich with description of Turkey. The romance between Charolette and Atakan continue to enthrall as an old enemy closes in determined to finish them off for good. There are intense and vivid character portrayals of the villain Tischenko as well as the main characters and terrorists. Karlsen keeps you in suspense wondering what will happen next and how it will all end.

The review end...”Highly Recommended” which is exactly how I feel about this great author.
So listen now and share an interesting, and entertaining show as I chat with my special guest today on A Book and a Chat with Chris Karslen

You can find out more about my guest and their books at:
"Chris Karslen - Byzantine Gold"