A Book and a Chat with Bob Ferguson 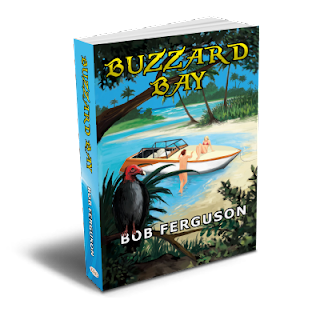 Bob Ferguson is my guest on today’s “A Book and a Chat”, chatting about his debut book the thriller “Buzzard Bay”. Bob grow up in a remote region of Canada without electricity or telephones, spending many an evening dreaming of faraway places listening to an old battery operated radio.

Later these once dreamed about places became reality as Bob traveled extensively. His trips to the Bahamas formed a basis for Buzzard Bay for the show Bob contacted us from Fiji, where Bob writes and his wife teaches.

Enjoyed by both men and woman, Buzzard Bay gives readers all the adventure and thrill they could ask for in this unputdownable read.

Bob Green and his family get the opportunity of a lifetime by becoming involved in a new farming project in the Bahamas.  A plane crash confirms his suspicions as to why the farm has been operating at a loss.  The project is not what it seems on the outside.

The discovery of drugs on the airplane put all their lives in jeopardy.  Instead of leaving well enough alone, Green decides to fight back. He becomes involved in a world of intrigue, sex, violence, and drugs.  In doing so, he finds out that there is a fine line between good and evil. An assassination attempt in Canada goes terribly wrong during a vicious snowstorm.

When the sky clears and the bodies pile up, it becomes quite apparent that this was no hunting accident.  Two men escaped.  Bob Green was motivated by the love of his wife and family, Henekie by the death of his best friend and mentor, but mostly by greed.  Unwittingly, these two bitter enemies become embroiled in a bitter power struggle between a Columbian drug lord and the CIA in the Bahamas.

Buzzard Bay" in an original plot with twists and turns that will keep you turning the pages. A fantastic mystery that includes sex, violence, drugs and romance. I loved his characters as they were strong and independent. I do hope there is a sequel to this book, I want to know what happens! Highly recommended for all readers.

So listen now and share an interesting, and entertaining show as I chat with my special guest today on A Book and a Chat with Bob Ferguson

You can find out more about my guest and their books at:
"Bob Ferguson - Buzzard Bay"