A Book and a Chat with Mark Rubinstein 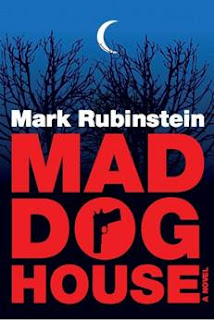 Fellow Connecticut author Mark Rubinstein is the guest on today’s “A Book and a Chat”, with a background of medicine and psychiatry which includes several non-fiction books, Mark has now produced his debut fiction novel in the form of the wonderful suspenseful and riveting, “MAD DOG HOUSE”.

The book is a fast passed page turner, a provocative psychological thriller that will keep you as one reviewer stated… “kept reading faster and faster to find out the ending.”

The action revolves around three men who grew up together and never expected their pasts would come back to haunt them 30 years later. Throughout the novel, the author provokes readers to think about the unrelenting power of the past, and the demons lurking inside others, and perhaps themselves. Rubinstein, a psychiatrist, never lets us forget that no one is ever completely in control of their destiny.

Roddy Dolan was a young man living in Brooklyn with an explosive temper and shady friends, which nearly landed him in prison at 17. If it weren’t for a compassionate judge and the Army, Roddy might have ended up going nowhere.  But that’s the past, gone for good. Or is it?

After escaping his hell on earth – a harrowing childhood in Sheepshead Bay, Brooklyn – Roddy now has a successful, fulfilling career as a surgeon, a beautiful family, and a lovely home in the suburbs of New York. Today, at age 45, he is a different man and worthy of the respect he has earned. Rage is no longer part of his life. Or, so Roddy thinks...until a friend from the past appears out of the blue and drags him back into the shadows of organized crime and re-evokes his long-buried “Mad Dog” alter ego.

Reviews have been flooding in from many readers with words such as… “can’t put down,’ fast-paced, superbly written thriller” and “In Mark Rubinstein’s Mad Dog House, the characters–all well-developed and dripping with authenticity–propel the novel along with style and edge-of-your-seat excitement. Word of caution: be prepared for an all-night, page-turning read where you will emerge exhilarated and begging for more.”

Well reviewer your wish will be granted, as we discussed during the show, people are already asking for more and the standalone novel will soon have a follow up in the form of “Mad Dog Justice”.

So listen now and share an interesting, and entertaining show as I chat with my special guest today on A Book and a Chat with Mark Rubinstein

You can find out more about my guest and their books at:
"Mark Rubinstein - Mad Dog House"

Email ThisBlogThis!Share to TwitterShare to FacebookShare to Pinterest
Labels: A Book and a Chat, begging for more, can't put down, dripping with authenticity, fast paced, Mad Dog House, Mark Rubinstein, Must read, thriller