A Book and a Chat with Dilruba Z Ara 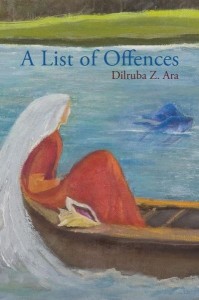 On Tuesdays show we had a guest calling in from Fiji discussing a book based in Canada and the Bahamas, today my guest Dilruba Z Ara called in from Sweden and we discussed a book based in Bangladesh.
While the story is set in Bangladesh it is one that can relate to woman around the world, and has proven so with its spread of popularity across many nations and it’s translation into many languages.

It is no surprise Dilruba has become an author of note, literature is in her blood through several generations.  Dilruba was nurtured on Greek mythology by her father, and her mother read her Indian fairytales as bedtime stories. Involved in literary activities throughout her childhood and adolescence, Dilruba had her first story published when she was eight years old.

Her novel “A List of Offences” first introduced in 2006 has been published in Bangladesh, Spain and Greece and is now available both in English and as an E-Book.

About “A List of Offences” (taken from Before It’s News blog):

In a lush Bengali village, a much-longed-for daughter is born with hair the color of sunlight on the river. The shock of the child’s silvery hair makes the midwife wet herself in the birthing room – an omen for village gossip. A life of misfortune is predicted for the baby girl Daria, who grows up not wholly unaffected by the rumors that circulate around her village every time she does anything unusual. The women in her family and in her village expect her to follow the cultural behavior in which women are taught from infancy to keep silent about things that may belittle their value in the marriage market.

Meanwhile, Mizan, an orphan boy, is stranded by the river after a flood. Daria’s parents shelter him, but off stage a servant of the family mistreats him. Because he can read and write, Mizan’s only recourse is to make a secret list of the mistreatments, which he titles “A List of Offences.”

However, Daria’s father, who also fears that village gossip will follow Daria to her future in-laws’ family, plans to save her from her inauspicious destiny by marrying her off with Mizan. But Daria falls in love with handsome lawyer Ali Baba and marries him. Leaving her village for the city and her husband’s home, she finds that his mother is obsessively bitter that he has married a country bumpkin. Daria forces herself to put up with her new family, for as a married woman she no longer belongs to her parental family. Both pride and fear of angering her own mother keep her silent for a long time, until she herself begins to make her own personal “List of Offences” and becomes a mother herself.

“I think what inspired A LIST OF OFFENCES is that I have seen how girls are raised and treated. In Third World countries you can see a pattern where girls always have to fight for their rights – even within the family. They are told to keep quiet: you do not talk about things that might signal you out as an unsuitable girl in your social orbit; even if you’ve been raped you hide that. In the book, Daria’s story is only a micro version of the macro thing that has been happening within families… home has been the center of repression for girls for ages.”

So listen now and share an interesting, and entertaining show as I chat with my special guest today on A Book and a Chat with Dilruba Z Ara

You can find out more about my guest and their books at:
"Dilruba Z Ara - A List of Offences"