A Book and Chat with Hunter Shea 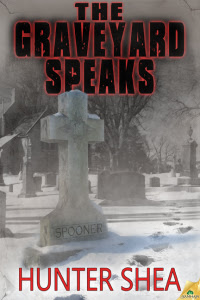 While some authors get their start listening to parents reading fairy stories or reading the likes of the Little House series, Hunter Shea however did his learning in front of the TV or at a drive and is the product of a childhood weaned on The Night Stalker, The Twilight Zone and In Search.  That being the case it’s no wonder that he has turned out to be a “Master of Paranormal Horror”.

Hunter is the author of such books as Forest of Shadows, Evil Eternal , Swamp Monster Massacre and Sinister Entity  he is also proud to be one half of the Monster Men video podcast, which along with his partner in crime, Jack Campisi produce a light hearted show with the approach to dark subjects. They explore real life hauntings, monsters, movies, books and everything under the horror sun.

His first big hit was “Forest of Shadows”.

John Backman specializes in inexplicable phenomena. The weirder the better. So when he gets a letter from a terrified man describing an old log home with odd whisperings, shadows that come alive, and rooms that disappear, he can’t resist the call. But the violence only escalates as soon as John arrives in the remote Alaskan village of Shida. Something dreadful happened there. Something monstrous. The shadows are closing in…and they’re out for blood.

Now in his latest release we are once again introduced to the Backman family this time in the form of John daughters Jessica in the free, yes “Free”  “The Graveyard Speaks”.

About “The Graveyard Speaks”:

Deep in a dark, snow-covered cemetery, a terrifying, moaning apparition rises from the same grave night after night. Even the most hardened caretakers won’t go near the Spooner gravestone on their midnight rounds. Only one ghost hunter has the will to face the unknown, but at what price? In the chilling blackness, only Jessica Backman is prepared to answer the spectral cry from beyond when the graveyard speaks.

Jessica also appears in his other new release “Sinister Entity”.

The Leigh family is terrified. They’ve been haunted by the ghostly image of their young daughter, Selena. But how can that be, when Selena is alive and well, and as frightened as her parents? With nowhere else to turn, the Leighs place their hopes in Jessica Backman, who has dedicated her life to investigating paranormal activity. Accompanied by a new partner who claims to able to speak to the dead, Jessica will soon encounter an entity that scares even her. And a terror far worse than she imagined.

You can find out more about my guest and their books at:
"Hunter Shea - Sinister Entity"