A Book and a Chat with Mike Lynch 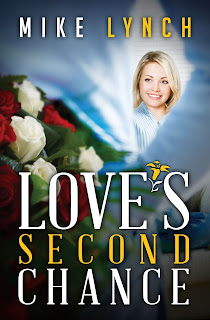 My guest on today’s “A Book and a Chat” could be said to be a late bloomer in the literary world his first book finally saw the light of literary day decade after he first wrote it, so saying since that first completion Mike Lynch has continued to produce one “must read” novel after another covering many different book store shelves.

Mike’s first novel “When the Sky Fell” which was jointly written with Brandon Barr will soon be joined by a follow up sci-fi novel “After the Sky Fell”. However Mike’s latest novel is in fact a romance story “Love’s Second Chance”.

Everyone deserves a second chance in life, no matter how unlikely. Dana Rogers learns this powerful truth while she serves as the pastor's assistant at New Covenant Church, the center of community life in the town of Fairhaven for the past two hundred years. There she has caught the eye of Evan Johnson, a successful real estate agent and kindred spirit. But the tragic death of her fiancé has wounded her so deeply she has vowed never to love another man again, including Evan.

A steady decline in church attendance the past few months has become a source of concern for Dana, which if not stopped she fears it could have an adverse affect on the town. Despite her strong resistance, Evan helps Dana work through the pain of her loss, developing a relationship with her neither of them thought possible. In a stunning turn of events, New Covenant Church suffers a devastating setback, one that threatens to undo everything Dana has worked to save, including the first embers of a relationship with Evan.

As one reviewer stated… “This book gets two thumbs up from me. If you love a good romance, this book is a must read...” a comment I totally agree with.

So listen now and share an interesting, and entertaining show as I chat with my special guest today on A Book and a Chat with Mike Lynch

You can find out more about my guest and their books at:
"Mike Lynch - Love's Second Chance"

Email ThisBlogThis!Share to TwitterShare to FacebookShare to Pinterest
Labels: After the Cross, Book and a Chat, Brandon Barr, Love's Second Chance, Mike Lynch, Must read, Romance, When the Sky Fell