A Book and a Chat with Joseph Spencer 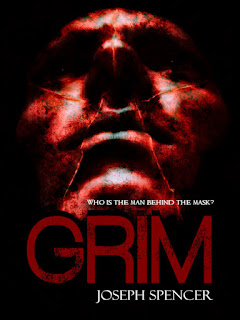 From an early love of reading Sherlock Holmes through a traveling sports reporter to working with police officers every day at the emergency 9-1-1 communications center it might seem obvious that  the debut novel for my guest Joseph Spencer might well have some form of detective base, and so it does with his paranormal crime thriller “Grim”.

His debut novel “Grim” is the first in the “Sons of Darkness” series which is soon to be followed by the second in the series “Wrage”.

Grim started with the idea for the Heath Grim character. This was inspired by Heath Ledger’s performance as the Joker in Dark Knight. Joseph wanted to develop a character which created chaos like the Joker character, but had more of a sympathetic story. Always loving gritty, edgy characters which are morally gray, he wanted to take his readers down a more chaotic path than what was explored in the Dark Knight.

About Grim: (taken from a review on Amazon)

Grim, by Joseph Spencer, covers a series of murders that have occurred. Heath Grim is a war veteran who has scars on his face and is rarely seen without a mask. Though Heath's best friend has been dead for a couple of years, Heath has been known to still have conversations with him in his head! Adam White is a renowned police officer who is tasked to investigate the murders that have occurred. Adam is seen as a hero.

When new murders begin to happen that are similar to those before, Adam fights to solve them and put an end to it all. Especially since Adams wife is one of the people who fell victim to the awful crimes. Cyrus Black is a man who's bad side you don't want to be on. He's a city thug who seems to have his hands in everything, as well as everyone within the city on his payroll, including the mayor. Cyrus takes a dislike to Adam, and therefore makes Adams life a living hell. The more you read, the more secrets you begin to uncover about each of the characters.

Good mix of characters, each with their own secrets and past. Keeps the reader turning the pages to see how it is all connected. Although not too graphic or gory, it is a story of the deepest and darkest of souls.

So listen now and share an interesting, and entertaining show as I chat with my special guest today on A Book and a Chat with Joseph Spencer

You can find out more about my guest and their books at:
"Joseph Spencer - Grim"