A Book and a Chat with 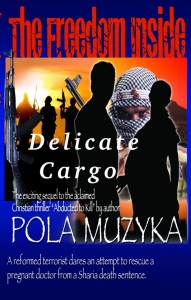 It is a welcome back for my guest on today’s “A Book and a Chat”, she is another of those multi-talented people who have gone from success in on artistic mode to another. Pola Muzyka is an artist, actress, speaker and award winning author, she was raised on a sheep farm, and her love for the outdoors is still something she holds onto.

Her route lead her through modeling, a  career as a dramatic actress, both starring and feature roles in Hollywood-based motion pictures. She has showcased her visual art in many galleries and currently hosts a television series for baby boomers. Add to that her being accomplished award-winning TV, commercial and corporate writer and now an award winning author and you can see just how talented Pola is.

Pola’s passion lies in her relationship with Jesus Christ, this has lead her not only to her touring  India as a media missionary where she produced documentary films helping pastors in various countries. Also she founded her own founder of the internet based, “Christian Media Alliance”.

Previously on the show we discussed her debut and now award winning novel originally entitled “Escape the Hezbollah” has now been re-edited and released as “Abducted to Kill”. The book comes in two parts “Terror Regime” and “Sleeper Cells”.

Terror Regime
After moving to Iran, a young American named Joseph Rabbani, is brutally abducted and commanded to train in a terrorist camp. As part of his training he is forced to kill people who share his Christian faith in order to survive and warn his fiancée.

Sleeper Cells
Joseph discovers a hidden agenda behind his abduction to kill. The plot to plant sleeper cells in the U.S.and Europe until Islam can take over prompts him to escape at all costs to save his loved ones.

This has now been followed by her new release “The Freedom Inside: Delicate Cargo” with a third book in the series Guerrilla Fighter" soon to join the series.

About “The Freedom Inside: Delicate Cargo”: (taken from Amazon)

In The Freedom Inside Joseph Rabbani once again faces the terror regime when he leaves the US to rescue Haleha, a pregnant doctor who lives in a terrorist country. Her husband, Francesco, must remain anonymous and that means she could be sentenced to death. To make matters worse, they have both become involved in government espionage in order to save Christians and others from the radical regime.

Haleha Ramirez must urgently leave Iran. Haleha is a doctor working for an Imam who does not know of her marriage or her new pregnancy. She dodges former friends and meets secretly with others as she passes smuggled information to her husband, Francesco, a dissident who helps the underground church. If the Imam finds out they will be executed.

Meanwhile in the U.S., Joseph Rabbani wakes to a gnawing feeling of emptiness and guilt after experiencing years of freedom from Islamic rule. Once an unwitting volunteer in the army of the Hezbollah, he now enjoys his wife and children and the peace of living in a free society where he works and worships as he pleases. But lately he's having nightmares. Some of the ones left behind were Muslims who converted to Christianity because of him. They could be in danger and he is responsible.

Back in Iran Francesco gets a message to Joseph. Haleha must leave her employer, and leave him now. But first, she wants to smuggle out the latest information—a local pastor is being targeted.

Joseph knows the danger involved with returning. He tracks down Jon Pierre Braud, an American soldier from the Bayou who once worked as a spy in Iran. Braud's profession as a wild game hunter is a cover for his work as a bounty hunter. Joseph finds Jon Pierre and they set out to the rescue, but Jon Pierre's motives are sketchy.

As we learned through the program Pola is also well down the path of with the Christian Film Fund and the making of Abducted to Kill into a movie. Hopefully next time she joins us on a show we’ll be able to find out more about that venture.


So listen now and share an interesting, and entertaining show as I chat with my special guest today on A Book and a Chat with Pola Muzyka

You can find out more about my guest and their books at:
"Pola Muzyka - The Freedom Inside: Delicate Cargo"