A Book and a Chat with Debbie T Kilday 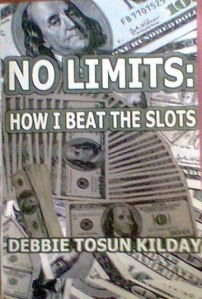 My guest today is fellow Connecticut and CAPA author and I’m please to say, friend Debbie T Kilday. The name might ring a bell to a few people as her husband Mike has also been on the show a couple of times.

A photographer for many years Debbie has previously published a couple of books on the subject, “Wooden Branches” and “Farmington River Reflections” which also includes some of Debbie’s poetry.

Her debut book “No Limits: How I beat the Slots” tells her own story of a life playing the slots machines where she won millions of dollars over a period of about five years and the many people she met along the way.

During the show Debbie shared with us how at the age of 50, her girl friend who had cancer asked her to come to the casino with her, because of the illness Debbie ended up going to the concert on her own. Not knowing anything about gambling or the slot machines, Debbie explained how she was accepted into a group of “Casino Friends”. The last thing she expected was to win a jackpot; this launched her role as a high roller instant celebrity of sorts.

The good side was that it was fun, she made new casino friends, danced with the stars like Barry Manilow and Paul Anka, how enjoyed casino perks like hotels, VIP restaurants, and her own private help at the Casino’s, and she was able to share her money. She even helped people in need like her friend who had high medical expenses even though she knew she was going to die soon of cancer.

Her success at the local Connecticut Casino’s was replicated in Los Vegas, Debbie seemed to know how to read the slot machines> the book also tells of the down side, the pressure, both on herself and the family. People took advantage, there was unexpected trouble at airports when transporting the cash winnings home, it tested her married life, and there were even attempts at extortion and yes, in the end, having to declare bankruptcy.


“No Limits: How I beat the Slots” tells how Debbie won 1.8 million dollars in the last five years playing slots--legitimately, and she is probably the only person in the world that has done that. So, she is real and her book is the real thing, and it should be scrutinized and applied by every serious slot player--before the casinos get wind of it.

A great read and would be a equally great film.

So listen now and share an interesting,and entertaining thirty minutes with my guest Debbie T Kilday
If you have enjoyed the blog or the radio show, why not become a follower of the show?

You can find out more about my guest and their books at:"Debbie T Kilday- No Limits: How I Beat The Slots "