A Book and a Chat with Joel M Andre 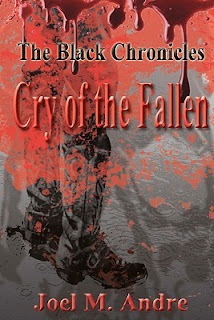 Today on “A Book and a Chat” with have another returning guest in the form of mystery writer Joel M Andre. Joel was a guest back in late December of 2010, and it was interesting to hear what new works he has been creating.

Originally a writer of poetry including his own collection of poems “Pray the Rain Never Ends”, however all the time there was a darker side of Joel waiting to hit the pages. His first dark and slightly tongue in cheek novel “A Death at the North Pole", where he created a dark world among the death of Kris Kringle. It was also the introduction to his character Lauren Bruni.

His early success was followed by such novels as “Kill 4 Me” a story in which a woman is haunted by a vengeful spirit through text messages and instant messaging. He also branched out into the Fantasy realms with collection “The Pentacle of Light”. A tale dealing with five major races battling for control of Earth, and the acceptance of their God.

Lauren Bruni was not forgotten though and returned in “The Return” and now appears again in his new series “The Black Chronicles: Cry of the Fallen”.

About : “The Black Chronicles: Cry of the Fallen” (taken from Amazon)

On a warm summer afternoon, in Northern Arizona, a double homicide stains the ground with blood. Detectives are called out to handle the investigation, each plagued with their own internal demons, and aren't prepared for what they are about to find. Detective Lauren Bruni, faces a world of darkness and evil, as a demonic force begins to leash an attack on a small town. As the stakes begin to rise, so does the stunning truth, that not even Lauren can imagine? In a world where her life had started to fall apart, she must pick up the pieces and push forward in an effort to save those that she loves the most. Joel M. Andre takes the Horror genre and pushes the boundaries in a tale full of suspense, dark comedy and genuine horror.

With further adventures planned for Detective Lauren Bruni and more of the fantasy saga, the name Joel M Andre will be one we’ll hear a lot more about.

So listen now and share an interesting,and entertaining thirty minutes with my guest Joel M Andre
If you have enjoyed the blog or the radio show, why not become a follower of the show?

You can find out more about my guest and their books at:"Joel M Andre - The Black Chronicles: Cry of the Fallen"

Email ThisBlogThis!Share to TwitterShare to FacebookShare to Pinterest
Labels: A Death at the North Pole, Book and a Chat, Cry of the Fallen, Dark, ghosts, Joel M Andrem The Black Chronicles, Lauren Bruni