A Book and a Chat with Peter Burke 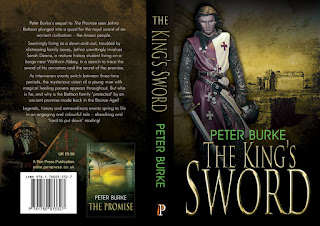 Peter Burke, my guest today, is not only a fellow English author, also a fellow member of “The Old Ashmoleans” rugby club, and I’m pleased to say friend. Due to be on the show a few weeks ago, when issues with Skype kept him from appearing, so it was good to have him join tonight’s “A Book and a Chat”.

Also interested in history, when Pete moved to Wales and then Yorkshire that his work as a master stone mason, touching the very stones that ancient Brittan’s might have used thousands of years ago, enhanced his interest and he started making up stories from those days and telling them to his children.

Years later, following a visit to Crete and the puzzle of a famous Bronze Age artifact, Pete found himself setting out his own voyage of becoming a writer. I chance meeting with Howard Davis, a well know figure in the publishing world in 2006, eventually lead to the publication of his book “The Promise” the first novel in a trilogy.

About “The Promise” (Taken from Amazon)

A routine business trip to Egypt ends in terror for father of two, Robert Batson when he is abducted and held captive in appalling conditions, for what seems like a lifetime. Then, following his unexpected release, to help come to terms with his ordeal, he decides to trace his ancestry as a form of therapy. And so, begins his long and compelling journey that takes him back to ancient civilization on his quest to discover the lost treasure of the Anassi people and, ultimately, the secret of the promise.

This early success has now been followed with the second book of the series “The Kings Sword”, the sequel to the 'The Promise' sees Jethro Battson plunged into a quest for the Royal sword of an ancient civilization - the Anassi people.

About “The Kings Sword” (Taken from Pete’s Webb Site)

Seemingly living as a donw-and-out, troubled by distressing family issues, Jethro unwittingly involves Sarah Deane, a mature history student living on a barge near Waltham Abbey, in a search to trace the sword of his ancestors and the secret of the promise.

As interwoven events switch between three time periods, the mysterious vision of a young man with magical healing powers appears throughout. But who is he, and why is the Battson family' protected by an ancient promise made back in the bronze age?

Many have praised Pete’s writing calling it colorful historical reading that is hard to put down.

As one reviewer wrote of “The Kings Sword”

“The second book in the 'Promise' trilogy, and this is story telling at its best. A gripping tale that see's the Battson family's seemingly fruitless efforts to find the old sword gather pace drawing in new characters that Burke has written in such a way that makes you feel like you are a part of their world and experiences in such a way that draws you into this wonderful story. “

During an entertaining show we not only learned about the final book of the Trilogy, but also the interest and details of the plot that King Harold did not die at the Battle of Hastings but was indeed whisked away to die later of old age… You’ll have to listen to the show to find out more about that one..

So listen now and share an interesting,and entertaining thirty minutes with my guest Peter Burke
If you have enjoyed the blog or the radio show, why not become a follower of the show?

You can find out more about my guest and their books at:"Peter Burke - The Kings Sword"