A Book and a Chat with C.Y. Bourgeois 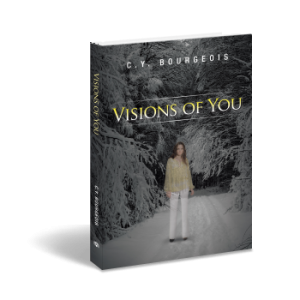 C.Y Bourgeois (Carla) has always been an avid reader, but it was not until the death of her father that she decided to put pen to paper, or rather fingers to keyboard to produce a book. Originally she was going to write something dedicated to her father, but struggling with exactly what to create she instead produced her debut mystery thriller “Visions of You”.

As we heard through the show it did not end up quite as she set out writing the novel, as the main character changed during the writing to become “Shelby Leight is a wise-cracking, lighthearted teenager, looking forward to a fun-filled senior year in high school”. Using her own own knowledge of Alaska and the town of Palmer, Carla has created a debut novel that as one reviewer put it…

“This book was a wonderful read! You can picture the town and characters and feel like you are there without the story getting bogged down with too much detail. It is a quick read because the end of each chapter leaves you with something that makes you want to keep going and find out what will happen next. The writing style well-suited to young adult and adult readers. This is an excellent freshman effort and I am happy to hear that the sequel is already in the works!”

About “Visions of You”: (taken from books web site)

It’s 1975 in Palmer, a peaceful, sleepy little town in the heart of Southcentral Alaska. Shelby Leight is finally a high school senior and looking forward to having the time of her life. But, as Robert Burns wrote, “The best laid plans of mice and men often go awry.” Instead of having a fun-filled year of football games, parties, and the prom, one of Shelby’s best friends is brutally murdered.

During the course of the investigation Shelby falls in love for the first time only to have her new boyfriend reveal a shocking family secret. She experiences a spiritual awakening – visions of her dead friend, Larita – and warnings from the other side that the terrifying serial killer is coming – for another one of their friends. The police and FBI are searching for clues, but the killer is still out there and he’s headed their way.

So far the book has received a great feedback…

This book gives realistic details of the town and makes you feel like you can see it. Just reading the details of the story made me want to read it right away. Once I started reading, I couldn't put it down! Bourgeois did a great job of drawing the reader in and making you want to keep reading until the end. I can't wait for the sequel!

Well reviewer, her follow up novel “Visions of Mortality” is already underway, and as mentioned at the start of the blog, the book dedicated to her father that started Carla down the writing path, that also has now been produced in her story “The Concrete Nome”.

So listen now and share an interesting,and entertaining thirty minutes with my guest C.Y. Bourgeois
If you have enjoyed the blog or the radio show, why not become a follower of the show?

Direct link to the show
A Book and a Chat with C.Y. Bourgeois

or you can download the mp3 file of the show from
"C.Y. Bourgeois"

You can find out more about my guest and their books at:"C.Y. Bourgeois - Visions of You"