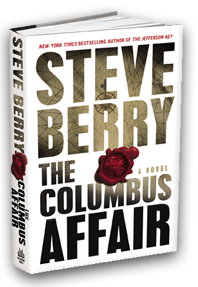 I recently read a quote about the author on today’s “A Book and a Chat” that “If Ian Fleming and Doris Kearns Goodwin had a lovechild, it would be Steve Berry”, my guest on today’s show.

It is always a pleasure to have not just such a famous author on the show but also as Steve makes the so show enjoyable and we always learn something new.

As we have learned before from Steve it was not always success for him. Originally a practicing attorney, Steve went through twelve years from the day he started writing to the day he sold his first book. Twelve years and 85 rejections (over five different editions) before he finally sold a manuscript. It was more that the world changed during those years, and what perhaps was not the fashion suddenly came back into vogue.

From that start Steve has gone from strength to strength, he now has 14 million books in print, which have been translated into 40 languages and sold in 51 countries.

From his first book “The Amber Room” through his Cotton Malone series which include such bestselling titles as “The Templar Legacy” and “The Jefferson Key”.

As we learned last year, Cotton is taking a much needed break with Steve’s 2012 novel, though fear not, as we learned he’s back in 2013 with a fresh adventure to do with the Tudors and set in England…

While Cotton has taken his break, a new character has appeared in “The Columbus Affair” in the form of former Pulitzer Prize-winning investigative journalist Tom Sagan.

About “The Columbus Affair”: (Taken from Steve Web Site)

He was called by many names—Columb, Colom, Colón—but we know him as Christopher Columbus. Many questions about him exist. Where was he born, raised, and educated. Where he died. How he discovered the New World.

None have ever been properly answered.

And then there is the greatest secret of all.

Pulitzer Prize-winning investigative journalist Tom Sagan has written hard-hitting articles from hot spots around the world. But when a controversial report from a war-torn region is exposed as a fraud, his professional reputation crashes and burns. Now he lives in virtual exile—haunted by bad decisions and the shocking truth he can never prove: that his downfall was a deliberate act of sabotage by an unknown enemy. But before Sagan can end his torment with the squeeze of a trigger, fate intervenes in the form of an enigmatic stranger with a request that cannot be ignored. 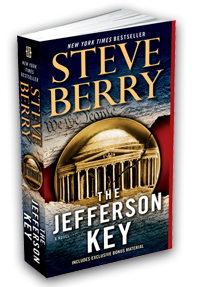 Zachariah Simon has the look of a scholar, the soul of a scoundrel, and the zeal of a fanatic. He also has Tom Sagan’s estranged daughter at his mercy. Simon desperately wants something only Sagan can supply, the key to a 500 year-old mystery—a treasure with explosive political significance in the modern world. For both Simon and Sagan the stakes are high, the goal intensely personal, the consequences of opposing the other potentially catastrophic. On a perilous quest from Florida to Vienna to Prague and finally to the mountains of Jamaica, the two men square off in a dangerous game. Along the way, both of their lives will forever be altered---and everything we know about Christopher Columbus will change.

The book is a standalone thriller that is launched on May 15th however early reviews such as...

“There is great suspense, betrayal, lies, murders, and all of the other highlights that mark the Berry books.”

“if you like thrillers, particularly those with a historical background. The pace is fast, the history seems mostly factual, and the characters are well drawn.”

We also learned that not just next year’s book is written but the year after and even the one for 2014 are planned and underway.

Steve Berry is one of those authors who have readers counting the days down until his next book is released, and I count myself as one of those readers.

So listen now and share an interesting,and entertaining sixty minutes with my guest Steve Berry
If you have enjoyed the blog or the radio show, why not become a follower of the show?

You can find out more about my guest and their books at:"Steve Berry - The Columbus Affair."

I was delighted to see Steve Berry finally abandon the increasingly improbable adventures on which he sent hero Cotton Malone and turn instead to what seems like a standalone thriller featuring a kind of anti-hero, disgraced journalist Tom Sagan. About to kill himself, Sagan instead is "persuaded" by some villainous folks to assist them in their quest to retrieve some objects of great value -- in other words, it's typical Berry fare, full of villainous villains, a race to solve a historical mystery that goes on at break-neck speed for 400-plus pages.

The plot revolves around the identity of Christopher Columbus and Berry devises a lively and reasonably plausible explanation for all the mysteries that surrounded his life and voyages. It leaps from Florida to Vienna, from Prague to Jamaica, as the nasty creepy villains and Sagan and his shifting cast of allies race to be the first to lay hands on the treasure, objects to which Sagan's family turns out to have a special relationship. Gun shots ring out, there are some homicidal Cuban hounds, political conspiracies, a legend about a golem... You'll enjoy it more if you forget logic and the probability of Berry's theories being true, and just go along for the ride in relatively exotic locales.