A Book and a Chat with Germaine Shames 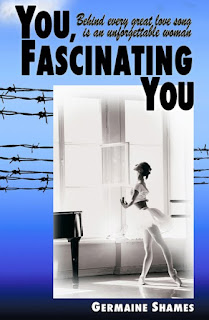 Germaine abandoned a successful corporate career and devoted myself to writing full-time, first as a journalist and correspondent, and later as a fiction writer, focusing on novels and screenplays. Her novel “Between Two Deserts” launched her on the path of a successful author, receiving much praise as well as several awards.

About “Between Two Deserts” (taken from Amazon)

Jerusalem lies at the end of an old Roman road, a city swathed in light and sorrow.
Coming to Jerusalem to fulfill her grandfather's dying wish, Eve Cavell finds herself poised on the fault line of three worldsÂ—Muslim, Christian, and Jewish. Inspired rather than frightened by the ghosts and warring children that surround her, Eve emerges from mourning to a life larger for its dangers. The lost and aloneÂ—an Australian street preacher, an apathetic Palestinian, an alienated Israeli investigator, and othersÂ—find a way to her door. Soon she attracts the attention of Mozes Koenig, an elderly Hungarian author in search of a heroine. Eve, with her lodestar eyes and solitary dance, captivates the old man's imagination, and together they create an opus to humanity in a city made of stone.

Now after many years of research and investigation, Germaine has followed up with what I would call a blockbuster of a novel. “You, Fascinating You”.

About “You, Fascinating You”:

In the final weeks of 1938, in the shadow of Kristallnacht and imminent war, a heartsick Italian maestro wrote a love song called "Tu Solamente Tu."

Its lyrics lamented his forced separation from his wife, the Hungarian ballerina Margit Wolf, in the wake of Mussolini's edict banishing foreign Jews from Italy. The song, first recorded by Vittorio de Sica in 1939, catapulted to the top of the Hit Parade and earned the composer the moniker the "Italian Cole Porter." The German version, "Du Immer Wieder Du," would be performed by Zarah Leander, the foremost film star of the German Reich, and its English counterpart, "You, Fascinating You," by the Glenn Miller Army Air Force Band.

Twenty-two years would pass before the maestro and his ballerina again met face-to-face.
You, Fascinating You begins as a backstage romance and ends as an epic triumph of the human spirit.

This book covers so many different topics, from romance to ballet, from the holocaust to music, as we heard during the show many have already stated what a great film it would make and I add my voice to that group. It is a book for all, a cross between “The Red Shoes” and “Europa, Europa” that will touch your heartstrings.

“The epic drama expected on the ballet stage is dwarfed by the tragic real life events of her ballerina heroine, Margit Wolf. Penetrating descriptions of political brutality and the prepossession of romantic love, an ever present theme in classical ballet, make for a page-turning, impelling read.”

So listen now and share an interesting,and entertaining show as I chat to today's guest Germaine Shames
If you have enjoyed the blog or the radio show, why not become a follower of the show?

You can find out more about my guest and their books at:"Germaine Shames - You, Fascinating You"

Email ThisBlogThis!Share to TwitterShare to FacebookShare to Pinterest
Labels: A Book and a Chat, Ballet, Between Two Desserts, Germaine Shames, Jewish history, Life, lost love, music, Stories of the war, trust, You Fasinating You

I'm humbled by this post and in awe of the energy, kindness and good humor with which you host your radio show and maintain this blog. Please consider me a fan.