A Book and a Chat with Dr Diane Hassan 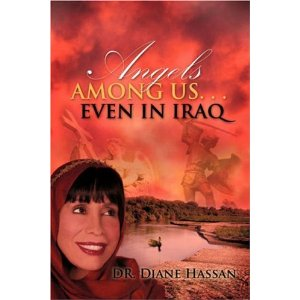 I get asked a lot about coming from England to America, how far it is to travel, time it takes, the fact I haven’t lost my accent and even what I think of America. But for me it was just 3000miles and at least the language is the same, okay more or less the same. But imagine how it was for my guest Dr Diane Hassan travelling from South Alabama to Bagdad about 10,000 miles to a totally different country and climate. This was back in the 70’s before Saddam, she met her now husband at University and moved to Iraq to be with him.

Diane’s travels, her life in Iraq and her and her families eventual escape after an attempted assassination of her husband during Saddam's purge following Desert Storm are detailed in her book “ANGELS AMONG US. . .EVEN IN IRAQ”.

Diane’s early days were one of constant learning; she was American wife of a prominent member of Saddam Hussein's political hierarchy, studying medicine, her husband, protected from perhaps some of the harsher side to Iraq in those early days. Those early days changed as Saddan came to power, stories of people going missing, worries about saying the wrong thing to the wrong person.

About “Angels Among Us… Even in Iraq" (taken from Amazon)

Angels Among Us . . . Even in Iraq is a fascinating story of love and survival, of how people can overcome any obstacle to fulfill a dream. In a highly entertaining fashion, the American wife of a prominent member of Saddam Hussein's political hierarchy chronicles her life in Iraq until she and her family dramatically escape after an attempted assassination of her husband during Saddam's purge following Desert Storm.

Dr. Taha Al Baka, a former Iraqi government minister, comments, "If you are among those Americans who care about their democratic freedoms, constitutional government and due process of law, then you should read this book. You will have a greater appreciation of your country and a greater resolve to guard the basic principles on which it was founded."

The story took over seven years to write, but is obviously written with passion, from her own experiences, not from second hand information about the situation in Iraq.

As Diane shared with us while telling the story of her husband’s escape from assignation, there are angels everywhere, and many not dressed in white playing harps, they appear in all places at many different times, under Saddam’s time of terror on Iraq.

As one reviewer wrote of the book…

ANGELS AMONG US is a way of holding a spotlight not just on Iraq but our search for good in a world where we might be prone to believe it exists. Through this book and the journey that Dianne and her family were able to go through and endure we are able to see that there is goodness and love everywhere.

So listen now and share an interesting,and entertaining thirty minutes with my guest Diane Hassan
If you have enjoyed the blog or the radio show, why not become a follower of the show?

or you can download the mp3 file of the show from
"Diane Hassan - ANGELS AMONG US. . .EVEN IN IRAQ"

You can find out more about my guest and their books at:"Diane Hassan - ANGELS AMONG US. . .EVEN IN IRAQ"