A Book and a Chat with David S Grant 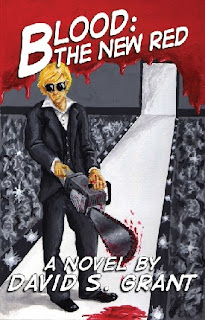 David S Grant is the author of ten books and many articles and columns, covering many subjects from music to sport. He stopped by today to chat about his latest novel “Blood: The New Red”.

About “Blood: The New Red”:

Blood: The New Red begins at an after party where Mickey, an ex-adult movie star turned supermodel, is aligning himself with one of top Designers of Seventh Avenue. While trying to land a job on the runway Mickey is thrown into the center of a scene where sex is often the motivation, the wine is served by year, and cocaine is back in full force. Juanita, Mickey's girlfriend, is having difficulties staying sober, fully clothed, and off of her famous boyfriend.
Mickey goes to work for Fashion icon Paul Johnson, one of the two top designers in NYC. The other is Sandy Johnson, another designer who will stop at nothing including murder to guarantee victory. A runway exhibition has been scheduled for the two to compete in and find out who truly is the best Johnson. Mickey will be Paul's top model, and Sandy has found a homeless person nicknamed Kung Fu Master to show his line.

In addition to getting his new line in place, Paul Johnson is also buying chain saws, the louder the better, to put the special in this special event.

Did you know that you can't be sentenced to prison if actively seeking help at a mental facility? Paul Johnson knows this.

Somewhere between the girls, counting Vicodin pills, and show preparation Mickey has grown a conscience and no longer likes what he sees. He believes (and his psychiatrist agrees) that he has the power to change what's happening around him.

Days before the show Kung Fu Master turns up dead and there is an attempt on Mickey's life. After a brief period of unconsciousness Mickey is back, is told that Juanita and brother Cheeks are now also dead and that he must continue with the show. After all, what would Steven Tyler do?

David continues to share his literary skill not only through his novels but also through his weekly rock, travel, and NBA columns. So keep a look out for the name David S Grant.

So listen now and share an interesting,and entertaining thirty minutes with my guest David S Grant
If you have enjoyed the blog or the radio show, why not become a follower of the show?

You can find out more about my guest and their books at:"David S Grant - Blood: The New Red"