A Book and a Chat with Eugene C Myers 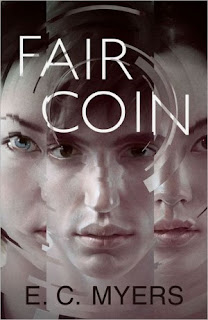 “Fair Coin” as previously stated, is Eugene's first novel, the story went through four revisions before he thought it was up to querying agents, this was followed by months before and further edit before going into submission. Two years, several near misses and a lot of rejection letters later and the book was sold to Pyr.

It then took another fifteen months before the book was finally published, though during that time Eugene wrote three other novels, including the planned sequel “Quantum Coin".

Sixteen-year-old Ephraim Scott is horrified when he comes home from school and finds his mother unconscious at the kitchen table, clutching a bottle of pills. The reason for her suicide attempt is even more disturbing: she thought she’d identified Ephraim’s body at the hospital that day.

Among his dead double’s belongings, Ephraim finds a strange coin—a coin that grants wishes when he flips it. With a flick of his thumb, he can turn his alcoholic mother into a model parent and catch the eye of the girl he’s liked since second grade. But the coin doesn’t always change things for the better. And a bad flip can destroy other people’s lives as easily as it rebuilds his own.

The coin could give Ephraim everything he’s ever wanted—if he learns to control its power before his luck runs out.

The book has received some fantastic reviews including this from one of the top Sic-Fi web sites “io9.com”…

Tired of cookie-cutter young-adult novels? The cure awaits, in the shape of E.C. Myers' astounding Fair Coin—a book which, among other things, achieves the feat of seeming like a dark fairy tale and a clever science fiction epic, rolled into one. It's a fast-moving book full of twists and cool character moments and definitely ideal for adults who miss the days of engaging, idea-driven science fiction. ..." --io9

So listen now and share an interesting,and entertaining thirty minutes with my guest Eugene Myers
If you have enjoyed the blog or the radio show, why not become a follower of the show?

You can find out more about my guest and their books at:"Eugene Myers - Fair Coin"