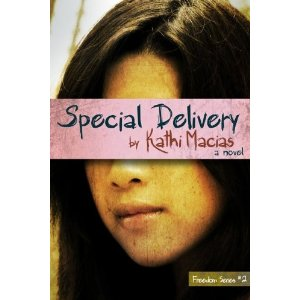 Kathi “easy writer” Macias is one of the shows most frequent and most popular guests with over 40 books so far produced as well as numerous articles and reports. Her success has just gone from strength to strength with last year alone her book “Red Ink” winning the AWSA Golden Scrolls Novel of the Year Award as well as finaled in the Carol Awards through ACFW. She was also 2011 Author of the Year from BooksandAuthors.net.

Each time Kathi comes on the show we learn so much more not just about her and her writing but also about items that she brings forth from all the corners of the world in a format that has readers always asking for more from this prolific writer.

When she was last on the show we learned about her Extreme Devotion series which consisted of four standalone books “No greater Love”, “More Than Conquers”, “Red Ink” and “Children of the Book”. During the show we learned how with “Red Ink” winning the golden scroll award, news of the success even reached China, and eventually the lady who the book was loosely based on, who has now been released from prison, and you never know, Kathi’s book might have aided her release.

During the previous show we also learned of Kathi’s plans for her first Christmas book, this has proved such a success that the publisher wants it to be an annual event, and this year’s book is already written.

Kathi’s latest set of books is the “Freedom Series” what can be called a “fiction with a mission” offering a trilogy based on the topic of human trafficking.

The first book, “Deliver Me From Evil”, was released in September 2011, with book two, “Special Delivery”, released last month and the final book, “The Deliverer”, set to release in Fall 2012. Though much of this series takes place right here in the States, as Kathi wanted readers to understand that human trafficking doesn’t just happen in faraway lands, the books will also contain a strong sub-plot set in the Golden Triangle area of Thailand as well as several scenes in Mexico.

About “Special Delivery”: (taken from Amazon)

In book two of the “Freedom” series, readers find Mara fighting against her attraction to Bible college student Jonathan Flannery even while wrestling with risking her own precarious safety to become involved in the rescue of another girl who is pregnant and desperately wants to escape her captors and save her own life, as well as her child’s.

Halfway around the world in a brothel in Thailand, a young girl is rescued with the promise of being reunited with her younger sister who was adopted by an interracial couple in the States, friends of Jonathan’s family. Meanwhile, Jefe—Mara’s uncle, who held her as a sex slave in his brothel in San Diego for years—seeks revenge for Mara’s testimony that put him behind bars for life.

Will his underworld connections be successful in kidnapping and killing the girl who believes she has finally won her freedom?

I am thankful that the beginning of Special Delivery was a refresher of sorts because it had been awhile since I read Deliver Me from Evil. Within minutes of picking it up, I was completely engrossed. So much so, that I read it from cover to cover. I found it impossible to put down with the character's lives hanging in the balance. For me the book was riveting. Just as it is with a really good movie, by the time I'd finished the book, I was emotionally spent. This is something that I've rarely experienced from a fictional work.

And that is what makes Kathi Macias' work so outstanding. Not only does she tackle dark issues which society and the church seem to overlook but she also does it in a very compelling way. You can't help but invest yourself emotionally while reading her books. They will turn you inside out and upside down providing haunting reminders, even after

As always Kathi left us with a snippet of things to come telling the us about a new trilogy of books she is working on called “Patches of Courage”, as with her success in 2011, I know she will once again be reaping in awards with not only the Freedom series, but also I’m sure her new “Patches of Courage” books when they hit the book shelves.

So listen now and share an interesting,and entertaining sixty minutes with my guest Kathi Macias
If you have enjoyed the blog or the radio show, why not become a follower of the show?

You can find out more about my guest and their books at:"Kathi Macias - Special Delivery"