A Book and a Chat with James Bottino 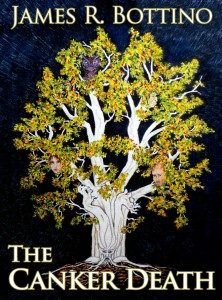 James Bottino, my guest on today’s “A Book and a Chat” has followed several paths during his life and faced some real challenges, the latest of which was to publish his debut novel “The Canker Death”

James is basically an English teacher and computer geek rolled into one. His early years of teaching high school English in a suburb of Chicago being supplemented by a double life in the deep corners of the night hacking and building computers and networks.

Word of this second pastime, unbeknownst to James, leaked out, and he started receiving employment offers. Son what was a hobby became a profession and he became a senior computer / networking administrator for a scientific research laboratory.

Far from living his dream, just six months into this position, however, tragedy struck when, at the age of 31, James was diagnosed with cancer. Given limited odds to survive James set about facing the challenge of the thought of is infant daughter not remembering him if he died, James set about the fight of his life, enduring massive doses of chemotherapy that killed the cancer but nearly killed him as well.

After years of struggle, he survived, but only after enduring systemic nerve damage from the treatments that left him permanently photophobic, phonophobic and with frequent difficulty in using his hands. These events focused his efforts and helped him to prevail in his dual goals: being a father to his daughter and completing his first novel, THE CANKER DEATH. Even the style that James decide to write in was a challenge, let’s face it if you can beat cancer, what sort of challenge is to write in first person?

About The Canker Death:

When the reclusive, cynical systems administrator, Petor Fidelistro, discovers that one of his own servers has been cracked late one night, he makes it his personal business to track down the perpetrator. What his search uncovers thrusts him, unaware, into a mad shifting between worlds, time and alien minds.

Fighting to keep his grip on reality, and forcing him to cope with his past, Petor finds himself uncontrollably transitioning between sentient minds that range from semi-conscious to dominant, from beings whose bodies and identities he can control, to those who control him so fully as to be unaware of his presence.

As the story unfolds, Petor gathers clues in a twisting mystery that sends him shifting between the mourning child Nanzicwital; the golem giant Faskin; the lascivious, female ambassador Desidia; and Nokinis, an insane prisoner with whom Petor battles for mastery of his own memories. As he struggles to make sense of what is happening to him, Petor finds himself embroiled in the tumultuous upheaval of a ubiquitous society that transcends life, itself.
Having beaten yet another challenge, James is now embarking on a further novel, this time aimed more the at the young teen market.

So listen now and share an interesting,and entertaining thirty minutes with my guest James Bottino.
If you have enjoyed the blog or the radio show, why not become a follower of the show?

You can find out more about my guest and their books at:"James Bottino - The Canker Death"