A Book and a Chat with Stuart Gustafson 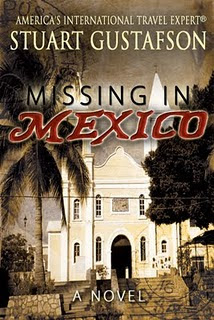 My guest on today’s “A Book and a Chat” is Stuart Gustafson, author of "Missing in Mexico", the first of the Mystery Tourism Book Series.

Before Stuart retired from the corporate world in 2007, he’d flown over 1,000,000 miles to 28 different countries, he even has the US Registered Trademark Name of America’s International Travel Expert®.

Once he retired Stuart began writing in earnest, it was also natural for him to want to continue traveling once he didn't have to travel as a job.

Now when he travels, it's for fun; it's for pleasure; it's to see new places in the world. This is why he has chosen to combine his love of travel and writing is to write mystery novels set in exciting locations around the world where he likes to go.

His debut mystery novel “Missing in Mexico” is set in San Jose del Cabo at the tip of Mexico's Baja California peninsula, a charming location where he has spent 2-6 weeks each year for the past eight years. This is how Stuart researches his books, by immersing himself into the culture of the area, and getting to know the people and their charm. The best compliment Stuart has received was at a local event in San Jose del Cabo and some of the residents told him that Missing in Mexico was indeed about their town and would he please consider writing another book about San Jose or at least about Cabo.

His second novel set in Sydney, Australia, is already underway, and in keeping with his pledge to make the story and its settings as authentic as possible, Stuart visited Sydney five times last year to conduct research.

Has he hinted during the show, he thinks he discovered something about the Sydney Harbor Bridge that not many people know about – and it’s something that they certainly don’t publicize… But we’ll have to read the book to find out what that is.

About “Missing in Mexico”:

Sarah Johnson is a 19-year college freshman who, along with her roommate Mary, spent an extra week in Los Cabos, Mexico after a family vacation over the Christmas break. Unexpectedly, Sarah's not on the plane back to Seattle, and her parents hire Stan, a seasoned Private Investigator, to locate her. Even with local help and some promising leads in the town of San Jose del Cabo, he's unable to find her, and he returns to Seattle to inform the parents.

Months later he receives a mysterious letter from someone who says she can help him locate Sarah, and he jumps on the next plane to Los Cabos. Will this be the lucky break he needs to find her? Or will she remain missing -- Missing in Mexico?

So listen now and share an interesting and entertaining show as I spend thirty minutes sharing "A Book and a Chat with Stuart Gustafson".

You can find out more about my guest and their books at:
"Stuart Gustafson - Missing in Mexico"