A Book and a Chat with Daren Krupa 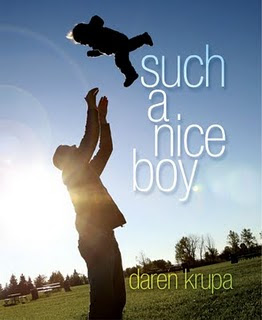 My guest today‘s "A Book and a Chat" is Daren Krupa, at the age of fifteen he was given an assignment by his English teacher, who obviously knew the potential laying within the none creative writing Daren, to write a “meaning of life” essay. As Daren said during the show, “how could a boy of fifteen have any idea about the true meaning of life?”

This did not stop Daren from going into the realms of literature as he worked as a newspaper reporter, photographer and editor.

Seventeen years ago he wrote his first and as yet unpublished novel entitled “Squaw Peak”, typing it out on an old manual typewriter, cutting and pasting until he had a completed draft.

Seventeen years later, his second and first published novel “Such a Nice Boy” was much easier to produce though as Daren shared it did take him ten years and numerous re-writes and edits.

"Such a Nice Boy" is about a man who leads a gay life because he’s afraid of his feelings for women. It’s a lifelong conversation Daren has been having with himself about sexuality. He wanted to write a contemporary gay-straight romance since my early Twenties, when he was dating women and made himself admit he liked looking at guys. The writing of the book has not only helped Daren come to terms with his life but also been somewhat of a healing process.

About “Such a Nice Boy”:

It’s the summer of 1999 in Denver. Alan Hovey is living the life he dreamed: sex with handsome, buffed, eager men. Except he isn’t gay. Made no difference until he crossed paths with female co-worker Lindsey Ronan and her infant son Morgan. He starts getting notions about Lindsey, and being a heterosexual father whenever he’s holding Morgan.

Lindsey is married and afraid of Alan because of a traumatizing incident during college.

At work Alan has become a pariah for having boldly stood up for himself. He draws the attention of Frank Lively, VP of HR, homophobic and deeply closeted. Frank tries to harass Alan into quitting.

After Lindsey verbally demolishes him while shopping for making eyes at another, Alan meets a young man who says you’re with me because you’re mad at Lindsey.
Alan becomes more confused after accidently seeing Lindsey at work with her blouse off, and displays a very obvious reaction.

The path Alan follows and the choices he makes form the heart of a boy who at age forty two becomes a man. He crawls out of a family upbringing filled with death and chooses life. His coming of age is unique and compelling.

Daren shared with us, how he is already working on his next book, which I’m sure will take a lot less than ten years to write and will provide further proof that the English teacher knew inside Daren there was a budding author waiting to share his talent with the world

So listen to an interesting and hugely entertaining show as I spend thirty minutes sharing "A Book and a Chat with Daren Krupa".

You can find out more about my guest and their books at:
"Daren Krupa - Such a Nice Boy"

Email ThisBlogThis!Share to TwitterShare to FacebookShare to Pinterest
Labels: A Book and a Chat, Coming of Age, Daren Krupa, gay men, marriage, meaning of life, memoir, relationships, Such a Nice Boy