A Book and a Chat with John G Nelson 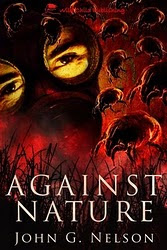 John G Nelson is my guest on today’s “A Book and a Chat” is a retired Air Force Master Sergeant and former Special Forces Medic. Now, the Director of Quality and Risk Management, Patient Safety, and Infection Control at a community hospital in Utah. His debut novel “Against Nature” was released on April 5th, 2011.

With everything that is going on in the world and has been for the last several years the book was almost an outlet for John and with his forces background there was obviously a lot of stuff to process either from reading or as with “Against Nature” writing it.

The book has all the trappings of a great dystopian novel, for a start it makes you think! It is an entertaining page turner, infused with a larger dose of social criticism in the spirit of Orwell or Huxley.

A deadly plague has struck the planet, and nobody is sure what it is. Thousands are dying every day, and everyone that is infected will die.

The United States rallies its top minds to try and combat the disease, but when research starts, the scientists are stumped. The pathogen seems to be neither bacteria, virus, or any other known organism!

One radical scientist, Serena Salus, believes that the organism is an extra-terrestrial "mite" that was brought from a recent space mission, but the U.S. government refuses to publicize this theory, telling everyone that it is a genetically engineered disease from Pakistan that was spread by terrorists. Even as Dr. Salus makes progress, her team is being targeted as anarchists and their research is kept secret.

When Dr. Salus discovers a plan that will only give the cure to the American elite, she has to make the extremely difficult choice of continuing with the research to save only the elite, or take her findings and run from a corrupt system.

The dystopia genre is very popular among YA fiction readers, especially with the success of the Hunger Games series. Against Nature is geared for the adult reader as well, in fact I can see people of all ages and reading and enjoying the book.

John is already planning a further publication in the form of his novel "Grey Suits” so look out for more news on the up and coming author.

So listen now and share an interesting and entertaining show as I spend thirty minutes sharing "A Book and a Chat with John G Nelson".

You can find out more about my guest and their books at:
"John G Nelson - Against Nature"