A Book and a Chat with Stephen Langford 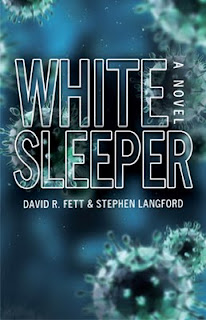 My guest on today’s “A Book and a Chat” is Stephen Langford, who along with co-author Dr David Fett is the creator of the great new bioterrorist thriller “White Sleeper”.

Stephen is a TV and movie writer and producer of more than 150 hours of prime time television. His credits include “Family Matters,” “Malcolm and Eddie,” and the movie “Lovewrecked,” for which he was screenwriter.

Dr. David Fett is an ophthalmic plastic surgeon specializing in reconstructive and cosmetic surgery around the eye, such as removing skin cancers around the eye, fixing children born with drooped lids, accidents, etc. He holds a BS degree in applied biochemistry, an MS degree in toxicology from MIT and received his MD from Dartmouth Medical School. Fett has published numerous articles on medical topics; White Sleeper is his first work of fiction.

The two of them came together some years ago with the idea to write a thriller in the both being fans of the biological terror novels of Michael Crichton (“The Andromeda Strain”) and Robin Cook (“Coma”), so it was natural for them to conceive a novel in a similar vein. The fact that their book is now talked about at the same level as those of Crichton and Cook shows that they have indeed created a novel that many are enjoying.

Osama bin Laden may be gone, but threats of terrorist attacks on the United States still remain a frightening possibility. Among the scariest scenarios is an attack using toxic biological agents, which could cause untold number of deaths throughout this country.

When Arkansas experiences a wave of rare, fatal diseases, the CDC calls in Dave Richards, a doctor with a shady past, to investigate. Richards sees this as an opportunity to clear his reputation and save his career. He joins with FBI agent Paula Mushari to investigate the seeming plague. When they think they’ve found the person responsible for the bioterrorism, the find themselves drawn deeper into a sinister pact between a white supremacist and a vengeful terrorist sect, each bent on causing mass destruction on the American populace. Richards and Mushari must race against the clock – and their own personal issues – to prevent a catastrophic plague from breaking out.

What critics and readers are saying about White Sleeper:“

I found this book hard to put down, and I loved the action and the interaction between Dave and Paul. The story is believable, and the writing is great. If you’re a fan of Robin Cook, then you’ll enjoy this newcomer.” Asthepageturns.blogspot.com.

“White Sleeper is a lightning-fast-paced story about two characters trying to stop a homegrown terrorist from unleashing a deadly virus on American citizens. Those who are looking for a straightforward action story about deadly viruses won’t be disappointed.” Prettyopinionated.com

So listen to an interesting and hugely entertaining show as I spend thirty minutes sharing "A Book and a Chat with Stephen Langford".

You can find out more about my guest and their books at:
"Stephen Langford and Dr David Fett - White Sleeper"