A Book and a Chat with Derrick Lin 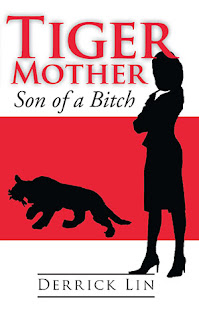 My guest on today’s “A Book and a Chat” is Derrick Lin, who after reading Amy Chua, bestselling book: Battle Hymn of the Tiger Mother decided basically enough, was enough and that one of the children who was brought up in, what Amy called the “Chinese Way” of raising children. He result is Derricks debut memoir “Tiger Mother; Son of a Bitch”

In the book Derrick tells us how, as a child he was abused and tortured as a child, up until adulthood, when he was finally able to break free of his oppressive mother.

“As a Chinese American, I am supposed to be highly successful. So my mother forced me to do things no other child my age was doing. I was driven to learn the violin, piano, trumpet and drums, practice them for hours, join the school orchestra and perform in recitals (which I hated)—by threats to make me sleep outside if I did not. I was forced to attend Chinese school on Saturdays and do my homework correctly, or face severe punishment. One punishment was forcing me to kneel in a dark closet for hours.”

Derrick was not allowed to have friends, watch TV or have any sort of social networking for fear it would corrupt him. His mother would continually berate him for not being the best. During summers she would tutor him in math and would keep him working until I he all the problems right—this would often be until 2 or 3 a.m.

In writing the book there have been many ghosts that have raised their heads from locked corners of his memory, however in writing about what he went though it has also shown others that there is a way through the hell that was meant to have been a childhood.

As one reviewer wrote about “”Tiger Mother : Son of a Bitch”:

The book kept me engaged the whole time. I read and wanted to keep flipping the pages. I recommend this to book to anyone who wants to be informed about how not to act if you are a parent and realize that the way you handle and mold your child is very significant and you can ruin your child's life if you don't treat your child equally. This book shows the perspective of a child and how they can be traumatized by parents if pushed too far. I think it is a very good book that is the ultimate answer to challenge Amy Chua's book Battle Hymn of the Tiger Mother and the bad things on her techniques of parenting. Highly recommended to those to want to see the other side of tiger parenting.

So listen now and share an interesting and entertaining show as I spend thirty minutes sharing "A Book and a Chat with Derrick Lin".

You can find out more about my guest and their books at:
"Derrick Lin - Tiger Mother: Son of a Bitch