A Book and a Chat with Amy Fellner Dominy 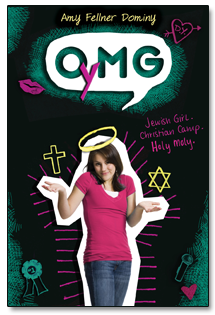 My guest on today’s one hour “A Book and a Chat” is another member of the “Class of 2K11” the group of debut authors whose books are released in 2011.

Amy Fellner Dominy debut novel “OyMG” has come from a literary background, from those early days of short stories, and like many of the authors she speaks to, she still has many of those early efforts still on her book shelf, or hidden away to be produced into a masterpiece at a later date.

Her love of the written word lead her to career as advertising copywriter, until Amy went back to school and in 2004 she got her MFA in 2004 with an emphasis in playwriting.

Amy’s plays have been staged across the country and she’s published in both children’s plays and short stories. “OyMG” is her first teen novel, though not her last.

Amy grew up in an area of Phoenix where the only other Jewish kids in school were her brothers and sisters. She tells the story how when she was fourteen, she was fired from a babysitting job when the family found out that she was Jewish.
It was something she had never experienced before, such hate like that. At the time it made her wary, and there was a temptation to hide the part of herself you think someone might not like.

The question is how much of yourself would you be willing to hide? From that question came the creative juices behind OyMG.

Ellie Taylor loves nothing better than a good argument. So when she gets accepted to the Christian Society Speech and Performing Arts summer camp, she's sure that if she wins the final tournament, it'll be her ticket to a scholarship to the best speech school in the country. Unfortunately, the competition at CSSPA is hot-literally. His name is Devon and, whether she likes it or not, being near him makes her sizzle. Luckily she's confident enough to take on the challenge-until she begins to suspect that the private scholarship's benefactor has negative feelings toward Jews. Will hiding her true identity and heritage be worth a shot at her dream?

Debut author Amy Fellner Dominy mixes sweet romance, surprising secrets, and even some matzo ball soup to cook up a funny yet heartfelt story about an outspoken girl who must learn to speak out for herself. (from The Story Siren blog)

The book has humor, a great story and a moral; many reviewers have told Amy how it helps them understand how other people’s lives can be affected by religion. The book is sprinkled with pieces of Yiddis, Tuchus (your behind) Schlep (carry) Kvetch (to whine and complain) Nosh (to snack).

As in: “Quit your kvetching, move your tuchus and schlep in these grocery bags or you’ll get nothing to nosh"

Amy’s wish for the book is that it will help the reader realize we're all different in our own ways. And that's it's okay to speak up and speak out--to be ourselves. It's always easy to find people to tell you that you're "less than" but we should all listen to our own voices. We should celebrate our uniqueness, not hide it.

With her second book coming out next year I am sure we will hear a lot more of Amy Fellner Dominy.

So listen to an interesting and hugely entertaining show as I spend sixty minutes sharing "A Book and a Chat with Amy Fellner Dominy".

You can find out more about my guest and their books at:
"Amy Fellner Dominy - OyMG"