A Book and a Chat with Joshua Graham 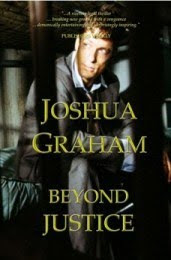 His debut full length novel “Beyond Justice”, is not only proof that his calling is as much as a writer as a musician, also that the time spent as a graduate of the Master Classes and professional writing workshops he attended have really homed his skills.

From short fiction novels under various nom-de-plume’s, with “Beyond Justice” Josh has spread his wings to produce a book that is already on many Amazon best seller lists.

Josh shared with us during the show how an idea for this story quickly blossomed into this 400+ page novel, which has become such a popular read for all ages.

In Beyond Justice, through Samuel Hudson we explore the depths of human character when his worst nightmares become a reality. His wife and daughter brutally raped and murdered, his son beaten and left for dead. And on top of all that, he becomes the primary suspect. This is for sure a legal/crime thriller but it also reaches at the core of one’s belief system. The most powerful themes in this story are loss, redemption, forgiveness and justice.

We heard how the opening chapters were hard to write Josh having to put himself in the position of Samuel Hudson, becoming the character and sharing the suffering the loss of his hero.

Now a full time writer, we learned about the other works either underway or needing that final bit of polishing, but as Josh stated, “Beyond Justice” has opened the door for him, and now I’m sure we’ll hear much more from this talented writer.

So sit back and enjoy an entertaining thirty minutes on a "Book and a Chat with Joshua Graham".

You can find out more about my guest and their books at:
"Joshua Graham - Beyond Justice"