A Book and a Chat with Jenny Davidson 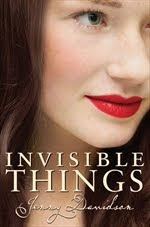 A short time ago, and old friend of the program, author of “Willow”, Julia Hoban contacted me about a friend of hers, who I have since found out was also a teacher of hers, who had a new YA novel coming out in November of 2011. The fact Julia mentioned that her friend and I were the “only two people of my acquaintance who know what ‘bubble and squeak' is, let alone have eaten it."

With a comment like that how could I not have her friend as a guest on the show?
This was doubled in “must have as a guest” when I found out this friend was none other than “Jenny Davidson"the author of the wonderful YA novel “The Explosionist” whose follow up novel “Invisible Things” comes out in November.

Jenny is a teacher, writer, numerous award winner, triathlon athlete, and one of the few people I’ve ever heard of who actually went to both Harvard and Yale (I thought there was a US law against that?).

Her first book a novel for adults, “Heredity” came out in 2003, to be followed by several nonfiction titles. Her debut YA novel “The Explosionist” hit the YA shelves in 2008, receiving many fantastic reviews, though as we heard during the show, not without a misunderstanding or two along the way.

The book is set in an alternative world, where Napoleon had one at Waterloo, and the French had been in power, except for a the northern countries such as Scotland, Denmark, Sweden etc. etc.

Jenny’s new book “Invisible Things” carries on the life of her hero 'Sophie', whose hair has now grown longer… (you’ll have to listen to the show to understand that comment) in late 1930’s French speaking Europe.

Sixteen-year-old Sophie knows there is more to the story of her parents' death. And she's on a mission to find the truth. To aid her in solving the decades-old mystery, Sophie has enlisted her best friend, Mikael, whose friendship has turned into something more. It's soon clear that Sophie's future is very much wrapped up in the details of her family's past, and the key lies with information only one man can provide: her parents' former employer, the elusive billionaire Alfred Nobel.

As the threat of war looms in Europe, dangers to Sophie and her loved ones grow. While her determination to solve the mystery doesn't waver, forces beyond her control conspire to keep her from her purpose. Then, news of her great-aunt Tabitha's death sets off a chain of events that leaves Sophie questioning everything.

The more Sophie learns, the more she realizes that nothing—and no one—in her life is what it seems. And coming to terms with the dark secrets she uncovers means imagining a truth that she never dreamed possible. Full of gorgeous settings, thrilling adventure, and romance, invisible things is a novel that dares to ask, what if?

During the show we learned a lot about Jenny and her writing, and a few tips for would be authors and readers along the way.

So sit back and enjoy an entertaining thirty minutes of a "Book and a Chat with Jenny Davidson".

You can find out more about my guest and their books at:
"Jenny Davidson - Invisible Things"