A Book and a Chat with Rudy Mazzocchi 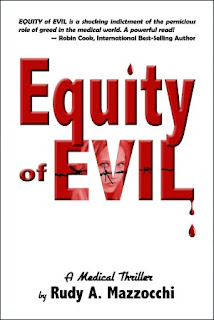 My guest on today’s “A Book and a Chat” is Rudy A. Mazzocchi author of the medical thriller “Equity of Evil”.


Rudy is best known for being a medical device and biotechnology entrepreneur, inventor, and angel investor, with a history of starting new technology ventures throughout the U.S. and Europe. He has authored more than 50 patents in the field of medical technology, including areas such as cardiology, neurosurgery, orthopedics, ophthalmology and biomechanics.

He describes himself as more of a “start-up” entrepreneur who was fortunate to develop the skills to raise the necessary capital to fund the development of innovations from concept through market release.
With a background which includes insight into some of the newest innovations in healthcare and also enables him to work with some of the most brilliant researchers, scientists and physicians in the industry, you know any medical thriller will not only be entertaining but thought provoking. So it is with his debut book “Equity of Evil” the first of what promises to be a trilogy of such novels.

The book is based on his  first-hand experiences in reviewing and/or participating in the development of some of the most controversial and cutting-edge medical technologies. These include starting one of the first embryonic stem cell companies to designing the world’s only electronic, auto-focusing implantable lens for inside the eye; (similar to the one in the Terminator or the Six Million Dollar Man – depending upon your generation)!

While his book deals with the controversial subjects of abortion and genetic engineering Rudy manages not to take either a Pro-Life or Pro-Choice position when using the abortion theme as a backdrop of this story. Neutrality on such a controversial topic is very difficult, but he believes that regardless of your political or moral position, the reader will find support in the words and actions of the book’s characters for whatever perspective they might have. The fact that, as he shared during the program he’s had encouraging emails from not only both side of the fence but the church as well shows how well he has managed his neutrality
.
About "Equity of Evil”:


In hopes of a quick and lucrative return during harsh economic times, a Venture Capital Fund makes a risky investment to start a challenging new business that appears capable of reaching profitability with modest capital requirements. The real challenge: optimizing one of the most frequently performed surgical procedures in the World — abortion — by replacing oftentimes seedy and life-threatening back room procedures with clean, safe and dignified alternatives.


An unfolding world of deceit, rape, human trafficking and assassination becomes deeply personal as Roman’s sole love interest secretly uses one of his new abortion services to end her own untimely pregnancy. When she disappears, his frantic search becomes a hellish nightmare that grows worse by the hour.


Based on true events, this bold novel involves some of the world’s oldest and most emotional—therefore controversial—issues, including abortion and human trafficking. At the core of each matter is man’s predisposition to control and take ownership of the human spirit for the sake of profit and personal gain. Such pursuit for the equity of evil is the force that drags Roman through a dark and brutal world that most people would deny exists.


This debut novel is a politically compelling, suspenseful and reality-cutting Medical Thriller that will challenge the reader’s personal views on capitalism, ethics, and the basic morality of his fellow man. It will drag you through a dark and brutal new world where human life becomes the actual equity of evil.
So listen now and share an interesting,and entertaining thirty minutes with my guest Rudy Mazzocchi.
If you have enjoyed the blog or the radio show, why not become a follower of the show?

You can find out more about my guest and their books at:"Rudy Mazzocchi - Equity of Evil"