A Book and a Chat with John Roach 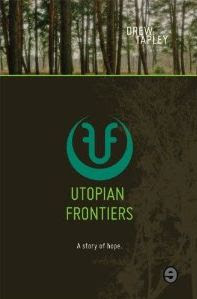 My guest today is John Roach, he tells how the idea for the UTOPIAN FRONTIERS FOUNDATION came many years ago while John was working as an Employee Relations Supervisor for a mining company located up North near the Alaskan panhandle. It was a hard rock mine operation located in the Coastal Mountain Range system of mountains. The mine site was located up in the mountains, near a huge field of glaciers. A tunnel led from the mill and habitation area, going under 3 mountains and 2 glaciers just to get to the ore body. And just a little bit of snow, how does 1000 inches of snow a year sound?

Upon his return to Toronto, John immediately had eye problems related to air pollution but that’s another story. He reconnected with his soon to be writing associate, Mike Parsons, and they picked up on mutual concerns, such as social/political/economic realities of the times. They discussed John’s experiences in a semi isolated corporate environment, lamented the condition of existing cities and related problems, and began to play “WHAT IF”.

From that came the idea of “UTOPIAN FRONTIERS FOUNDATION” and laterly a novel of the same name.

About “Utopian Frontiers” (The Novel)

What if there was a secret city at work on finding answers to the survival of humanity? Technologies beyond your imagination; a city expanding, recruiting and evolving. There is no government, no money, no bosses, institutions, cars or roads; and age takes on new meaning. This "facility" is one big research product in and of itself, and nothing else quite ike it exists on this Earth.

This is the city that Erwin Sharp and his family are drawn into on the fringes of a national park. They fall headfirst down the rabbit hole into a world of space probes, cancer cures, and a core myth that defies belief. They soon realize that some doors are only meant to swing one way.

This is a parable of trust and hope--a flashing beacon of hope in a world hell-bent on destroying itself. It is ultimately a story of ambition, of owning up to life, showing up and trading up. In a story that is as controversial as it is reassuring, sometimes it is possible to find something you always hoped existed, and in finding it, you confront your own truth as much as that of the world you live in.

What is inside the mysterious Hall 8, and what does that have to do with Erwin? And how is water the mechanism of peace or destruction? Thick with adventure, revelations and twists, this story shows how what we accept is only that which we've been conditioned to accept, and why an ancient Mayan prophesy doesn't actually mean what you think.

So listen now and share an interesting,and entertaining thirty minutes with my guest John Roach.

You can find out more about my guest and their books at:"John Roach - Utopian Frontiers"