A Book and a Chat with Joan Bird 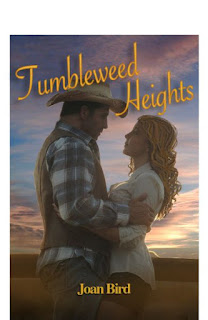 Joan Bird comes from a family that is almost as interesting as her book, involving a cattle rancher/silver miner, an orphan that survived the 1906 earthquake, the secretary to the Governor and the Irish lad who lied about his age to join the military. Mix with that her own previous existence as a singer/songwriter with a rock band and a pretence of telling stories, which with being one of six children helped while growing up and you have all the making of somebody who is destined to write.

Joan s is legendary amongst her family and friends for her storytelling. For years she's been including short stories with her holiday greetings each December and for years her friends and family have been encouraging her to write a book

With a “push” from a writing group, this love of storytelling produced her debut novel “Tumbleweed Heights” even then the title of the book has a story of its own. Her father waking the six kids up on Saturday mornings, by playing The Sons of the Pioneers Album, with that great song, “Drifting along with the Tumbling Tumbleweeds”.

Her fun book, while full of romance and happy ever after, also includes amazing dog and a food fight, rats, guns, raging storms and a kidnapping. So there’s plenty for the reader to read and enjoy. As one reviewer put it…

Funny. Rich descriptions, classic hero/heroine troubled pasts. With horses, bad guys, and quirky characters it's easy to engage. The tension between the gutsy Gilly and her hero is part of the dynamic. Though some may wish for more explicit physical connections, this reader was tantalized enough by the HEAT between Gilly and Luke so as not to be disappointed. With the countryside supporting the action, including thunder, lightning, old trucks, and the equivalent of Rin Tin Tin, simply a fun read. Okay, it's romance, but if nothing else, you'll want berry pie a few times a day when you're done.

Moving to Briarwood, Colorado had not been in Gilly Casey’s original life plan. Sure, she’d dreamed of owning a horse ranch, but as kind of a part-time gig, in Topanga Canyon maybe. But the best laid plans of this high-powered L.A. attorney turn to dust when more than her bar card is threatened. Fleeing to a life she had never imagined quickly becomes a cat and mouse game just to stay alive.
Luke Hudson’s road to Briarwood was no less bumpy. Hiding from his own demons, he’s no longer able to float below the radar when he recognizes the feisty Miz Casey is in more trouble than she’ll admit. Donning the hero mantle years after he’d shed that skin, Luke realizes that rescuing Gilly might just save him, too.
With so many secrets between them, does love stand a chance? When the past trains its loaded gun on them, truth may not be enough to safeguard Gilly and Luke

So listen now and share an interesting,and entertaining thirty minutes with my guest Joan Bird.

You can find out more about my guest and their books at:"Joan Bird - Tumbleweed Heights"

Congratulations to Joan for a wonderful interview and thank you, Barry for being an engaging host.