A Book and a Chat with Kellyann Zuzulo 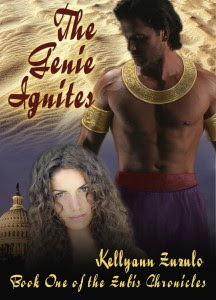 There are numerous books that feature shape shifters, werewolves and other supernatural beings, but what about perhaps the oldest of all these creatures, and in many ways a being that is closer to humans, and that is Genie’s, also know as djinn’s.

My guest today Kellyann Zuzulo, knows all about these, already producing numerous novella’s based on the subject she now with her first novel “The Genie Ignites” released.

Kerllyann is a former journalist, whose interest in Middle Eastern myth and legend stems from her stint as a Managing Editor of Publications for the Royal Embassy of Saudi Arabia in Washington, D.C. He previous works include A Genie in the House of Saud, Angels & Genies, The Genie's Curse and The Third Wish all about different Genie’s and while some of these might be revamp into novels her favorite Genie “Zubas” along with “Bethany O’Brien” are the main characters of “A Genie Ignites”, which is the first in her series of books “The Zubas Chronicles”.

About “A Genie Ignites”

Bethany O’Brien is a 21st-century woman with a career, ambition, and bills. She doesn’t remember how she once felt about a nearly 4,000-year-old genie named Zubis who suddenly invades her world, but he certainly remembers her. In a previous incarnation, Bethany was an important temple priestess who apprenticed to the djinn.
Zubis is powerful, alluring, and infuriatingly bemused by Bethany’s skepticism. He once vowed to love her forever and has no plans of breaking his vow. Along with returning glimmers of this past life, Bethany must soon confront a citizenship in shambles, a job in jeopardy, and a mandate from an ancient society to kill the genie of her dreams.

Although the priestess she once was had been taught that a romance with a djinni must never be, Bethany gradually realizes that her love for Zubis must never be forgotten. She will risk her citizenship, her job, and her life to save him.

Kellyann takes the reader into a magical world of romance and adventure, and with a second book already underway I’m sure her novels will be read and enjoyed by many.

So listen now and share an interesting,and entertaining thirty minutes with my guest Kellyann Zuzulo.

You can find out more about my guest and their books at:"Kellyann Zuzulo - Genie Ignites"

Congratulations to Kellyann for a wonderful interview and thank you to Barry for hosting.