A Book and a Chat with J. Anderson Coats

Today’s “A Book and a Chat” was another one hour special being that my guest was another of the great group of debut YA authors from the Class of 2K12. J. Anderson Coats author of the brilliant historical fiction novel “The Wicked and the Just”.

Jillian grow up surrounded by books as her mother was a librarian, sharing with her daughter the joy of the written word, her father being a geologist added the enquiring mind that questioned some of these books, also being the reason she was later able to travel a mile underground.

She started writing almost as soon as she could hold a crayon, and encourage by her parents created several stories featuring nothing but ponies, some of these early creations I’m pleased to say she still has.

At the age of thirteen Jillian finished her first novel. It was pretty bad, but fortunately no one told her that. By the time she graduated from high school, she’d written six other novels, including one massive 500,000-word doorstop book with a sweeping, complicated plot and way too many characters. None of these books was very good, but she loved every single one and learned something new with each.
Her literary education mixed with her love of history has now brought forth her debut novel “The Wicked and the Just” 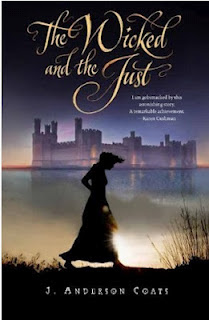 Neither one is going to get her wish.

Behind the city walls, English burgesses govern with impunity. Outside the walls, the Welsh are confined by custom and bear the burden of taxation, and the burgesses plan to keep it that way.

Cecily can’t be bothered with boring things like the steep new tax or the military draft that requires Welshmen to serve in the king’s army overseas. She has her hands full trying to fit in with the town’s privileged elite, and they don’t want company.
Gwenhwyfar can’t avoid these things. She counts herself lucky to get through one more day, and service in Cecily’s house is just salt in the wound.

But the Welsh are not as conquered as they seem, and the suffering in the countryside is rapidly turning to discontent. The murmurs of revolt may be Gwenhwyfar’s only hope for survival – and the last thing Cecily ever hears.

During the show we learned much about the Welsh history and that is Wales the country, not that swims in the sea as one person we heard thought the book was about, including the reason for the mention of Caernarvon, rather than it being called Caernarfon.
The book has already received many rave reviews before its launch date in April.

This book was filled with excellent characters, tons of actions, heaps of emotion and kept me up until way past my bed time. I’m really looking forward to see what Ms Coats writes next.

I for one agree with that statement, especially as we learned there is at least another if not two books in the pipeline about that period of Welsh history.

So listen now and share an interesting,and entertaining thirty minutes with my guest J. Anderson Coats .

If you have enjoyed the blog or the radio show, why not become a follower?

Direct link to the show
A Book and a Chat with J. Anderson Coats

or you can download the mp3 file of the show from
"J. Anderson Coats

You can find out more about my guest and their books at:"J. Anderson Coats - The Wicked and the Just"

Email ThisBlogThis!Share to TwitterShare to FacebookShare to Pinterest
Labels: 2012 debut author, 2K12, A Book and a Chat, historical fiction, J. Anderson Coats, Wales, Wicked and the Just, YA author