A Book and a Chat with K.T. Wells 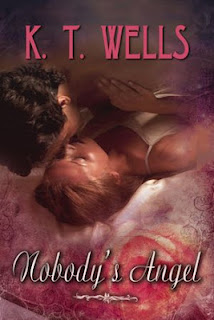 When I checked up about my guest on today’s show “K.T. Wells” (secretly hoping to find what the K.T stood for) one thing I did find was that apart for being the writer of a great debut romance novel “Nobody’s Angel” she also had a thing about four inch heels, frosted brown sugar cinnamon Pop Tarts and original Cap’n Crunch. All of which I managed to include in what turned out to be another interesting and entertaining “A Book and a Chat”.

K.T.as we learned on the program has been telling stories since before she could read. Narrating stories to her baby brother the plotline of which were gleaned from the books pictures. Not much has changed with this story creation, indeed one of her husband’s favorite pastimes is to listen to her tales after asking her to tell the story of people they observe in restaurants, airports or the subway.

Nobody’s Angel is her first published book, but actually the fourth novel she has written, if you are into romance, with the full gambit of emotions then Nobody’s Angel is the book for you.

About “Nobody’s Angel”: (Taken from blackvelvetseduction)

Jake and Angie’s twentieth high school reunion sets the perfect stage for their lifelong friends to reunite the former sweethearts. Major roadblock – they have to trick Angie into coming home after twenty years. An elaborate ruse ensues at the same time they work on browbeating Jake into attending.

Maneuvering through emotional minefields rates a 10 for difficulty level, particularly when Angie lives the maxim: Time does not heal all wounds. And Jake? Check the Wiki pic next to Pride comes before the fall. Yep, that’s him tripping all over himself year after year.

But the firm conviction that these two were meant to be together propels a cast of quirky, determined friends into action. When tragedy derails the best laid plans, will Jake and Angie’s love rise to the occasion?

In Nobody's Angel we meet a story about a love lost and then recovered.

We meet a young woman who's been going from relationship to relationship without committing to anyone because she fails to feel the spark ignited years ago by her high school crush and love.

Then a chance meeting at a familiar place gives her the second chance she's been wanting, so as to put things right with her heart, body and soul once and for all.

I love the author's prose, the fact that is was very well edited and put together and that the story flowed seamlessly without interruption.

A beautifully crafted novel that is certainly worth 5 stars well done K.T Wells looking forward to reading more work from you, stay blessed and keep on writing.

Well as we learned from K.T. during the show hopefully there will soon be more for that reviewer and all of us to read and enjoy.

So listen now and share an interesting,and entertaining thirty minutes with my guest K.T. Wells.

Direct link to the show
A Book and a Chat with K.T. Wells

or you can download the mp3 file of the show from
"K.T. Wells"

You can find out more about my guest and their books at:"K.T. Wells - Nobody's Angel"

Thank you for a wonderful interview. You made chatting over tea comfortable and the time flew. Also, I was impressed with your effort to get to know me before we spoke. I'll never live down Pop Tarts and Cap'n Crunch for as long as live now!

I look forward to the opportunity to spend time with you again.