A Book and a Chat with Dr Allen Malnak 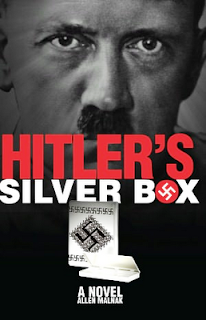 Dr. Allen Malnak is today’s guest on “A Book and a Chat” talking about his debut novel “Hitler’s Silver Box”.

Dr Malnak after a long career in the medical profession retired to Florida, there he read one day about a course in writing fiction where Hollis Alpert, a well known novelist, biographer, short story editor and movie critic was to be the teacher.

Dr Malnak took these classes for a couple of years learning the writing trade through various assignments often ending up in the form of short stories.

One such subject was titled “A Silver Box.” And for some reason, Dr Malnak decided to write it about a concentration camp prisoner at the Theresienstadt Concentration Camp who was forced by a Nazi colonel to make a silver box which would be a present for Adolph Hitler. Thus started the journey to “Hitler’s Silver Box”

Perhaps it was not is strange for Dr Malnak to write about the such matters when you consider that when his Dad died of natural causes during the Second World War and immediately following the war, along with his late brother Lewis he began to try to track down his father’s European family. They wrote letters to everyone they could think of and after about a year received a detailed reply from the International Red Cross. Nazi records as well as witness reports indicated that all members of his dad’s family had been murdered either in or near Kovno or after transfer to a death camp. Every man, woman and child!... So, one entire side of my family was destroyed by the Nazis.

“Hitler’s Silver Box” is not just about the war and what went on, it a wonderful novel that is full of tension with a rich plot with numerous twists and turns and a variety of different conflicts as well as an engaging love subplot.
The style of the novel is clear, the structure is skilled, and the ending is satisfying

Dr. Allen Malnak’s Hitler’s Silver Box is a compelling thriller that will keep the reader glued to the pages of the book until the book is finished.

Max Bloomberg, an old bookseller, living in one of Chicago’s affluent suburbs is brutally murdered. However, Max suffered a lot of trials and tribulations even before he was murdered. The killers burned all of his holy books and forced him to turn over the silver box. But he refuses to give it to them. So, they murder Max.

Bruce, Max’s nephew, learns about his uncle’s murder and is devastated. Bruce becomes suspicious of the unexpected nature of the murder and knows in his heart that foul play must have been involved. What even adds to Bruce’s suspicions is that he learns that Max has been cremated. But an orthodox Jew would never want to be cremated. Then in a real twist the uncle leaves Bruce a lot of money and property which makes Bruce himself a suspect.

Things get much more complicated when Bruce starts searching for the journal that his uncle left. The reader is then transported to 1945 when Max was a prisoner in a concentration camp. Innocent people were killed all over the place and Bruce discovers that he must find the Silver Box before it is too late. The secret document is hidden within it, and it could the save the world from Nazi resurgence.

I can see this being a huge hit for Dr Malnak, and as he shared with us, he left some lose ends to “Hitler’s Silver Box” which are already forming into a follow up novel.

As one reviewer wrote…

"The characters in Hitler's Silver Box are quite intriguing and well developed. I recommend this book to anyone who has an interest in reading of events of the Holocaust or to anyone looking for a gripping, fast-paced novel."--

They recommended the book, and so do I.

So listen now and share an interesting,and entertaining thirty minutes with my guest Dr Allen Malnak.

You can find out more about my guest and their books at:"Dr Allen Malnak - Hitler's Silver Box"