A Book and a Chat with Lucas R Baker 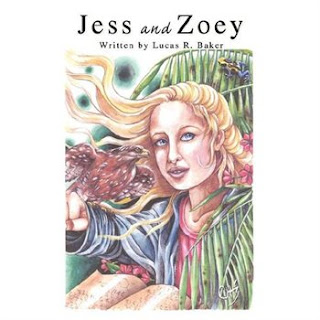 Some people get their ideas for novel in dreams, or while they sleep making sure they keep a notepad next to the bed, others like my guest today thoughts come to them while driving. For Lucas R Baker the guest on today’s “A Book and a Chat” he comes up with plots and ideas for books while driving his truck. Mind you it has taken a long while for the original idea of for his first book Jess and Zoe to grow from the idea stage to seeing the story in print. Ten years in fact from the time he first came up with the idea to having it printed. He wrote the story while virtually homeless, living in a tend with just paper and pen to create the story.

Jess and Zoe is about a young girl Jess who finds a hidden book in a forgotten root cellar. The book is filled with a strange language that nobody knows, and she is able to track the book back to a woman who was imprisoned during the Salem Witch Trials. Could this be magic? Using the internet, Jess learns this new language until her little sister Zoey is kidnapped. Since the authorities are unable to find Zoey, Jessy must use her limited skill in magic and go out on a journey to rescue her sister.

That however is not the end of Jess and Zoe, as their story continues in another of Lucas’s book “Sisters” which finds the two girls in the jungles of Mexico. They must get home and Jess must explain how she found Zoey. They face new challenges as they grow up and continue to learn magic. They have encounters with new villains as they face fresh obstacles. They make discoveries and fight for their lives.

As well as the young adult fantasy novel Lucas has also written a book “Running from the Mafia” based on his own life and events that had himself literally running from the mob.

His latest novel is “No Malice Towards Humanity” a sci-fi futuristic novel which has Nick is an assassin who has a computer implanted in his brain with which he can completely control his body but he doesn't like his job. He wants a real life and, when his chance comes, he fakes his own death and assumes the identity of someone else. But things are not so simple. In his pursuit of a wife, he must deal with new and unexpected challenges when he decides to live outside the fenced-in utopian cities in the non-citizen zone. When the authorities discover that he still alive, he is forced to work for them in exchange for keeping his new life. But the new threat he faces has stolen the components to a nuclear weapon and may be even more dangerous than Nick.

Lucas has now branched out into writing screen plays with inerest already being received for both “Jess and Zoe” and “Running from the Mafia.

So listen now and share an interesting,and entertaining thirty minutes with my guest Lucas R Baker.

If you have enjoyed the blog or the radio show, why not become a follower?

You can find out more about my guest and their books at:"Lucas R Baker - Jess and Zoe"