A Book and a Chat with Megan Bostic

My guest on today’s Book and a Chat is one of this year’s debut YA authors, a member of the Class of 2K12 Megan Bostic. Let’s first get the name right it’s Megan with a long “e” so it’s more like “Me gan”, now that’s out the way let’s chat about this great new author. Megan is the author of “Never 18” a YA book that has received great reviews from teens and adults alike.

Megan lives over on the west coast, but not the sunny climes location that one thinks of, the rainy and gray northwest weather that makes her extremely “angsty” (one of her favorite words). Megan loves the color black, monkeys (has a collection of sock monkeys), and is a notorious Facebook addict. She migrated from early writing of poems and songs, though the poetry is making somewhat of a comeback to writing her first novel which she completed in 2008. That novel still has to see the light of day and in 2009 she produced “Never 18”.

She writes in the “seat of your pants” style, typing away with reckless abandon to get, with the aid of numerous sticky notes, the story that is bursting out of her head typed out. Once written, then starts the editing and smoothing out process.

While “Never 18” is only 200 pages long it is filled with emotional scenes, though some the language and topics are perhaps not for the younger end of the YA market, “Never 18” is a book for all ages, and can and should be shared by adults as well as children as it relates to real life situations. 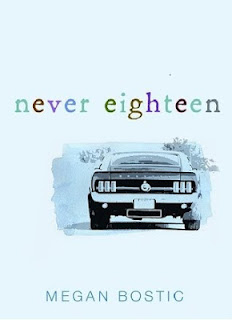 Austin Parker is on a journey to bring truth, beauty, and meaning to his life.

Austin Parker is never going to see his eighteenth birthday. At the rate he’s going, he probably won’t even see the end of the year. The doctors say his chances of surviving are slim to none even with treatment, so he’s decided it’s time to let go.

But before he goes, Austin wants to mend the broken fences in his life. So with the help of his best friend, Kaylee, Austin visits every person in his life who touched him in a special way. He journeys to places he’s loved and those he’s never seen. And what starts as a way to say goodbye turns into a personal journey that brings love, acceptance, and meaning to Austin’s life.

While Never 18 is Megan’s debut novel there are already several others either completed or in the pipeline, including another contemporary YA tentatively titled, Sad. I call it a story of loss, loathing and lacerations. It’s about a girl suffering from depression who ends up being a cutter, and her healing process.

New author Megan Bostic makes writing look easy. Her new novel, NEVER EIGHTEEN, is so clear, so smooth, so effortless, that the reader is completely immersed in the story, living it along with the characters. This story is so moving, so touching that I could not put it down. I read NEVER EIGHTEEN from cover to cover in a matter of hours. And normally, I would never look at this kind of book. It just isn't my normal genre. But I knew of Ms Bostic, and I had heard a lot about this book, so I leaped at the chance to give it a try. And, OH MY, I feel honored and privileged to have read NEVER EIGHTEEN. Megan Bostic it a true talent, and NEVER EIGHTEEN is a brilliant debut.

I for one, totally agree with that!

So listen now and share an interesting, and entertaining sixty minutes with my guest Megan Bostic

You can find out more about my guest and their books at:
"Megan Bostic - Never 18"