A Book and a Chat with Will Robertson 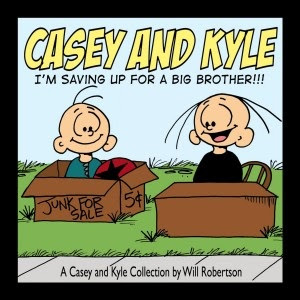 Comic srtrips could be said to go back to the caveman drawings in caves, though in England the start of the modern day type strips in papers goes back to the likes of Rupert the Bear which started in the Daily Express in 1920. The following years complete papers or “comics” were produced for children, titles like “Rover” Hotspur” and Wizard came out. These were followed by such titles as “The Beano” and “Dandy” which were produced in war time, coming out alternative weeks due to the shortage of paper and news print. In the US the Sunday “funnies” as they are sometimes known meant people were raised on the likes of Bloom County, Garfield, Calvin and Hobbes and Peanut. These were the inspiration of my guest on today’s program “Will Robertson” who started to draw his own cartoons while at middle school.

He had early success when one of his cartoons was featured as best 100 Editorial cartoons by students across the US.

In 2007 he started began to draw a series of cartoons based on his two boys. Those early drawings became the strip Casey and Kyle, which debuted online at comicsherpa.com (a new comic showcase developed by Universal Press Syndicate and gocomics.com) on February 6, 2008.

From that he produced his first book published his first book of Casey and Kyle comics and began to shop his work to print as a self-syndicated feature. His work now appears in several publications across the Northwest, where it is read by nearly 200,000 readers.

Those first two smaller books merged into his first full size novel “Casey and Kyle – So much for being on your best behavour”. This has now been followed by another full length book “Casey and Kyle – I’m saving for a big brother”

His cartoons cover the craziness and fun of children that all parents and children can relate to from the danger of Nerf guns to kids writing on your hands.

I quite like comics of all sorts, but this one really made me smile. It's easy to forget the strange, often funny, logic we have as children when we're trying to make sense of everything. Robertson really taps into this and is no doubt inspired by his two boys. I like that he is also inspired by his wife, who, in the comics, has her own funny star moments.

My favourite strips of the lot have to be the ones where Casey is covered in black marker. That sent me into giggles remembering how many times I got yelled at for drawing on myself.

I loved this comic so much that when I finished `I'm Saving Up for a Big Brother', I went straight on to `So Much for Being on Our Best Behaivior!' Now I can't wait to get Casey and Kyle Sketchpad.

As Casey and Kyle enters its fourth year of publication, it's exciting to see the many ways that it continues to grow and develop in new and funny ways.

New Casey and Kyle cartoons are published on Mondays, Wednesdays and Fridays.

When not creating cartoons, Will not drawing cartoons, spends his days working with other self-published authors to bring their work to print.

So listen now and share an interesting,and entertaining thirty minutes with my guest Will Robertson

You can find out more about my guest and their books at:"Will Robertson - I’m saving for a big brother"

Email ThisBlogThis!Share to TwitterShare to FacebookShare to Pinterest
Labels: beano, Book and a Chat, Casey and Kyle, Comic strip, I’m saving for a big brother, peanuts, Will Robertson