A Book and a Chat with Michael Charney 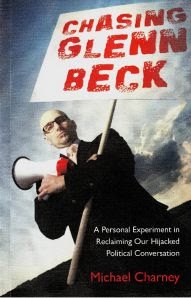 The guest on today’s “A Book and a Chat” is Michael Charney an award-winning author and publisher from Bedford, New Hampshire, he is also one of the few people I have had on my program that would understand the term “smeggggggg head” that comes from Red Dwarf, and as we found out during the program was a frequent purchaser of the late “Punch” satirical magazine. All of these things could well explain a lot about his debut book "Chasing Glenn Beck: A Personal Experiment in Reclaiming Our Hijacked Political Conversation".

When Glen Beck, long a symbol to Michael of everything that's wrong with the national conversation, made some really outrageous comments about the Japanese earthquake/tsunami victims and the apparently supernatural warnings we should all note thereof. The angry Michael thought he might try and take Glen Beck down a peg or two using today’s modern equivalent of the Roman forum “Twitter”.

Setting himself a few ground rules, he established a twitter account --@BeckIsALib-- and began tweeting, writing, watching the news, researching, tweeting and writing some more, always taking into account the real-world events around going on. Originally he started tweeting odd things about Glenn Beck: his liberal tendencies, his love for the environment, his disdain for big business and Wall Street. Things got interesting rather quickly, as you might imagine. There was a lot of virtual shouting in upper case with many exclamation marks and asterisks.

Shortly after he realized that there was more to say: logic had left our conversations and it was time to put it back. With other “tweeps” he discussed items such as the death of Bin Laden, the GOP primary campaigns, the push to end bullying — even the status of the Senate Candy Desk.

His book "Chasing Glenn Beck: A Personal Experiment in Reclaiming Our Hijacked Political Conversation" chronicles thirteen weeks (with an intro and epilog), with each chapter covering current events, personal narrative, actual tweet conversations and his own opinions.

As one reviewer put it...

…I lost count of the times I laughed out loud, as well as nodded my head in acknowledgement of a sad truth and then glimmers of hopefulness for a society that often seems to drift toward the gravitational pull of whomever is the loudest and most hyperbolic….

For me, this is a book about us as a society and what blind faith and extremism is doing to erase what little civility, rational thinking, and reason is left in American politics and the discourse surrounding it.

Buy it! Buy it for your Tea Party uncle and your Occupy Wall Street nieces and nephews. Buy a copy for yourself, too.

For me in brings back fond memories of reading Punch magazines and watching “Spitting Image” on English TV, it is full of humor and satire, yet also brings over the point that there is a silent majority just waiting to have their say, all be it via social media.

So listen now and share an interesting,and entertaining thirty minutes with my guest Michael Charney

You can find out more about my guest and their books at:"Michael Charney - Chasing Glenn Beck"