A Book and a Chat with Richard Tillotson 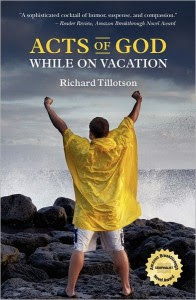 Richard Tillotson is my guest on today’s “A Book and a Chat” his life reads a bit like his book or is it his book reads like his life? Whatever it is, his debut novel “Acts of God While on Vacation” has already been recognized as a National Semi-Finalist for the 2009 Amazon Breakthrough Novel Award and named "Hawaii's best fiction book of 2011"

Richard has been a Peace Corps volunteer in Borneo, a playwright in New York, a copywriter in Hawaii, and is a relative of an English Lord, all of which helped him write “Acts of God While on Vacation”

The book begins with a death threat received by a philandering general manager of a lavish Hawaii resort, jumps to an anthropologist researching headhunters in the jungles of Borneo (sound familiar), then to a demonic, scandal-mongering paparazzo in New York (we know about that one) , and on to a gorgeous, party-loving English aristocrat in London (see what I mean about the book and Richard).

The book is alternately desperate and hilarious as their adventures draw them all to Waikiki, where their arrival coincides with an international conference on shamanism and a catastrophic, force-five hurricane.

It has received numerous glowing tributes such as…

A rollicking page-turner … This is Hawaii’s best fiction book of 2011.”- HONOLULU STAR-ADVERTISER

“As entertaining as it is enlightening”- PUBLISHERS WEEKLY

“It’s a comic novel with serious edges. Even more remarkable: It’s one of the few fictions set in Hawaii that gets all the details right.”- HONOLULU MAGAZINE

The book is one all will enjoy. As one reviewer put it…

What a magnificent book! The author achieves a well told tale of four individual souls who meet on a day of reckoning during a hurricane in Hawaii. What made it so fun, entertaining, and enjoyable to me was the author's ability to build four very different voices and make it interesting enough that I wanted to follow them through multitudinous settings and adventures. I loved the diversity of people and places and the underlying spiritual questions that were interwoven and finally, on the fateful day, addressed under circumstances that given the brevity of the subject, left me laughing.

As Richard shared he is already a thrid of the way through his second book based in Washington DC, as well as following up on a screen play.

So listen now and share an interesting, and entertaining thirty minutes with my guest Richard Tillotson

You can find out more about my guest and their books at:
"Richard Tillotson - Acts of God While on Vacation"