A Book and a Chat with Debra Winegarten 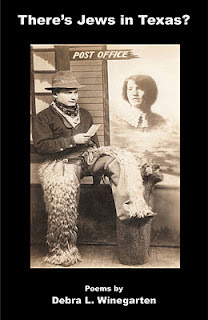 You can always tell how good and interesting a show is, by how quickly the time goes by when your hosting one, normally I am fairly lucky and the thirty minutes just seems to fly by, today was one of those shows. It seems I had just started chatting with my guest Debra Winegarten, when I checked the clock to find there were just a few minutes left.

Debra is one of those writers who was creating written work almost as soon as she could hold a crayon, the fact that her mother Ruthe Winegarten was a writer of note in Texas, meant that instead of Debra been put to sleep buy the noise of their mother's sewing machine, Debra was often comforted by the sound of her mother typing on her IBM Selectric.

Debra’s first completed book was a memoir she was ked to write "Strong Family Ties: The Tiny Hawkins Story", however this was not the first book she had started and after a break of some years that first book saw the light of day when she published “ an S inspiring biography about female aviator Katherine Stinson in her book , Katherine Stinson : The Flying Schoolgirl.

As I have said in the past one of the things I love about hosting my radio show is that you never stop learning, and today was no exception.

Debra shares in her book that Katherine Stinson was the fourth woman in the United States to receive her pilot’s license in July 1912. Besides that, she was the first pilot in the U. S. to carry pioneer airmail, the first woman to fly alone at night, the first woman in the world to perform the loop-the-loop, and the first pilot to perform skywriting in 1915. Add to that the story Debra shared with us about how she ended up flying in the first place and how she was credited with instituting pre-flight checks you know this is a book about one great lady.

Now Debra has returned to her roots as a young Jewish girl being raised in Texas with her award winning book “There’s Jews in Texas?” a small, but packed book of poems that was winner of the Poetica Magazine, Contemporary Jewish Writing 2011 Chapbook Contest.

Winning that award is of no surprise when you read the book, as the title would indicate, there is some humor in Debra’s poetry. And coming out of Texas one would expect to find some anti-Semitism as well and the author does not let the reader down, often combining humor and anti-Semitism appropriately in a manner that Jews and non-Jews can both appreciate. An example is from when she was in second grade…

A grown man stops me on the sidewalk
Eyeing my Star of David necklace and asking if I’m Jewish.

When I nod yes, (I’m not supposed to talk to strangers),
He tells me that’s really too bad for me,
Because didn’t I know that
Jews burn in Hell when they die?

Tears falling so hard I could barely see,
I dropped my weekly treasure and ran home
To Mom so fast I thought
I might keel over before I got to her
And be snatched right down to Hell.

When I told Mom what happened,
She put both hands on my shoulders,
Knelt to my height where she could look square in my eyes,
And in that Dallas drawl of hers, said,

So listen now and share an interesting, and entertaining thrity minutes with my guest Debra Winegarten

You can find out more about my guest and their books at:
"Debra Winegarten - There's Jews in Texas?"