A Book and a Chat with Stephanie Osborn 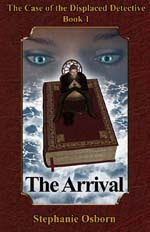 My guest today is Stephanie Osborn, former rocket scientist, payload flight controller and a veteran of over twenty years of working in the civilian space program, as well as various military space defense programs.

She has always enjoyed writing, and as we heard during the program actually wrote Sherlock Holmes story when she was in fourth grade that was rejected because the teacher thought it was a copy of an actual Conan Doyle story, it is a shame that story no longer exists as I’m sure it would be amongst the other wonderful novels created by Stephanie since her retirement from the space race.

Her first book “Burnout” was so close to home and actual incidents that subsequently happened. Along the way she has worked with both Darrel Bain and Travis S Taylor on further Science Fiction series “The Cresperian Series” and “Extraction Point”.

In her latest production “The Displaced Detective Series” Stephanie has come full circle as it brings back her love for Sherlock Holmes. The first two books in the series “The Arrival” and “At Speed” are already out and receiving great reviews.

About “The Displaced Detective Series”

This is a science fiction mystery in which the brilliant hyperspatial physicist, Dr. Skye Chadwick, discovers that there are alternate realities, and said alternates
are often populated by those we consider only literary characters. Her pet research, Project:

Tesseract, hidden deep under Schriever AFB, is her means of looking in on these continua. In one particular reality, continuum 114, a certain Victorian detective (who, in fact, exists in several continua) was to have died along with his arch-nemesis at the Reichenbach Falls. Knee-jerking, Skye intervenes, rescuing her hero, who inadvertently flies through the tesseract wormhole connecting his universe with ours, while his enemy plunges to his death. Unable to send Holmes
back without causing devastating continuum collapse due to non-uniqueness, he must stay in our world and learn to adapt to the 21st century. 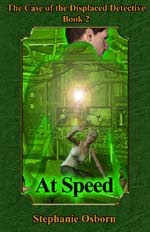 Meanwhile, the Schriever AFB Dept of Security discovers a spy ring working to dig out the details of - and possibly sabotage - Project: Tesseract. Can Chadwick help Holmes come up to speed in modern investigative techniques in time to
stop the spies? Will Holmes be able to thrive in our modern world? Is Chadwick now Holmes' new "Watson" - or more?

And what happens next?

Well we will find out, as this series promises to run and run as Stephanie has the next two in the editing/publishing stages, book 5 is being written, book 6 is planned, and book 7 is actually finished but needs beefing up. As we heard this prolific author is also producing and co-producing further nvels in her other series as well.

So listen now and share an interesting, and entertaining show as I chat with my special guest today on A Book and a Chat with Stephanie Osborn

You can find out more about my guest and their books at:
"Stephanie Osborn"