A Book and a Chat with Dr Ken Stoller and Galen 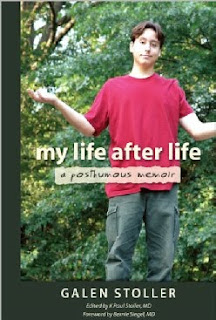 My guest on today’s “A Book and a Chat” is Dr Ken Stoller, the editor, rather the author of “My Life After Life” the first book in the “Death Walker” series.

Before Dr Ken started his medical career over twenty years ago, he was already writing on psychopharmacology even before he entered medical school. During medical school, he was hired to do research for the Humane Society of the United States, and became involved in an effort to prohibit the use of shelter dogs for medical experiments, which made him very unpopular in certain circles when he published an article entitled “Sewer Science and Pound Seizure” in the International Journal for the Study of Animal Problems. He was then invited to become a founding board member of the Humane Farming Association, and served as science editor for the Animal’s Voice Magazine, where he was nominated for a Maggie.

Starting his career as a pediatrician he also worked in the UCLA Department of Anesthesiology and volunteering at the since disbanded Parapsychology Lab at the UCLA Neuropsychiatric Institute.

In 1990s, after a friend, head of Apple Computer’s Advanced Technology Group, lapsed into a coma, Dr. Stoller began investigating hyperbaric medicine. Soon after, he started administering hyperbaric oxygen to brain-injured children and adults, including Iraqi vets and retired NFL players with traumatic brain injuries, also pioneering the use of this therapy for treating children with fetal alcohol syndrome. He is a Fellow of the American College of Hyperbaric Medicine and has served as president of the International Hyperbaric Medical Association for almost a decade.

The journey for the production of “The Life After Life” started one evening in 2007 when he received a phone call from the state police telling him that his 16-year-old son Galen had been illed at an unguarded rail crossing. Keenly aware of their emotional bond during his son’s life, Dr. Stoller would soon realize just how powerfully that bond could continue to express itself as his son began to communicate with him in dream states. Confused at first, plagued by disbelief, and overwhelmed with grief, Dr. Stoller, a man of science and medicine experienced difficulty in accepting what was happening to him, both in terms of the stress of the loss and the stress of the contact. Galen had to demonstrate to his father that it was truly him.

As said at the beginning Dr Ken is not the author, he is the editor, the actual author is Galen, himself who one day during the communication with his father asked, when he would start writing Galen’s own book.

About “The Life After Life”: (Taken from Amazon)

Sixteen-year-old Galen Stoller never saw the train that forced him, in December 2007, into another dimension–what some call the other side, heaven, or nirvana. He was able to make contact in dream states with his intuitive father within days and verbal contact by the end of the first month. Two years later he requested his father write down communication from Galen about his new circumstances. Dr. Stoller’s only comments in this revelatory account appear in Editor’s Notes at the end of each chapter. While there are many accounts of near-death experiences, never has an account been written documenting a personal encounter with such detail and clarity. The story of this gifted boy intent on getting through to earth the knowledge of what lies beyond is both comforting and sobering with a message relevant for all of us still living in this dimension.

This is a memoir that generates multidimensional consciousness, the wisdom of an open heart and the desire to participate in our unlimited opportunities guided by service and above all, love. I'm ready for Galen's next book in the "Death Walker Series".

Well reader, you do not have to wait too long, with the second book due out in the spring time and the third book already underway.

So listen now and share an interesting, and entertaining show as I chat with my special guest today on A Book and a Chat with Dr Ken Stoller and Galen

You can find out more about my guest and their books at:
"Dr Ken Stoller and Galen - Life After Life"