A Book and a Chat with Gordon Gumpertz 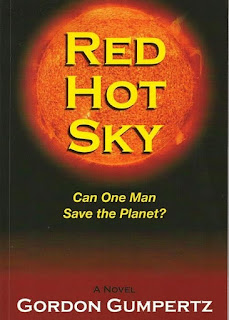 If you like novels full of action and adventure, or disaster films such as “Armageddon” then Gordon Gumpertz, my guest on today’s “A Book and a Chat” is the author for you.

Gordon, though a writer in his youth left in basically until he retired to follow his writing dream which has now led to the production of “so far” two great page turning novels. In addition he has won gold and silver awards in national and regional short story competitions.

"TSUNAMI starts with a bang and the reader is off on a 300 page wild adventure. I could not put it down. I know this is a cliché, but I have to say it anyway. TSUNAMI is a page turner."

Deep in the mid-Pacific, an ancient undersea volcano comes to life. Leading scientists predict the volcano will subside and go dormant, but seismologist Dr. Leilani Sanches is alarmed. Her advanced computer model shows the volcano will build to a monster explosion and trigger a tsunami massive enough to wipe out the Southern California coast.

Her theory is fiercely opposed by a jealous scientific establishment and powerful special interests who think a tsunami scare will hurt business. Her efforts to warn the public are blocked.

Coast Guard Commander Dave Steel believes she is right and becomes her ally in a race against time. Leilani and Dave meet the violence of nature and the violence of their enemies head on, and put their lives on the line in a frantic struggle to move five million people away from the coast before disaster strikes.

His new book RED HOT SUN, promises to be even better, sort of the world was going to end, a man was going to save it, he gets the girl, and everything turns out picture perfect as world destruction is avoided once again. Gordon however transforms this classic man versus nature battle into an action packed story of survival.

Scientists Ben Mason and Claudine Manet, developers of the computer model, are lovers as well as lab partners. While they work frantically to head off the approaching catastrophe, a disgraced Russian general hacks into their model and sees earth's bleak future as his opportunity for ultimate world power. Ben, who had left the CIA to develop the computer model at the national lab, is reactivated by the Agency and sent on a perilous mission to block the rogue general's plot.

Claudine, not realizing that Ben is on a secret mission, misunderstands his absence, putting their relationship on thin ice. Claudine is placed in charge of a massive NASA project that, if completed on time, could stop the approaching doomsday climate change. But her project is stalled by bureaucracy. And Ben, his cover blown, is on the run in hostile territory. The climate change calamity steadily approaches, threatening to turn the planet into a simmering wasteland.

With a third book already underway I’m sure we’ll hear a lot more about Gordon Gumpertz, I might add, I also think that “Red Hot Sun” would make a great movie.

So listen now and share an interesting, and entertaining show as I chat with my special guest today on A Book and a Chat with Gordon Gumpertz

You can find out more about my guest and their books at:
"Gordon Gumpertz - RedHot Sky"