A Book and a Chat with Lynne Kelly 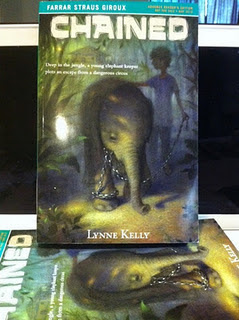 I have one of the debut authors from the Class of 2K12 on my show today. Lynne Kelly was born in Galesburg, Illinois, grew up in Houston, lived in some much colder places, then found her way back to the Houston area, where she works as a sign language interpreter. For a few years she also taught special education, a good career for someone with excellent organizational and planning skills. Lacking those skills, she quit teaching in 2006 and thankfully has more time for writing. But it was during those teaching years that she worked with some great kids and became interested in writing, so that all worked out.

After giving up her main teaching role, she started writing her book “Chained” which though going through many edits and re-writes has been well worth waiting for.

As we discussed during the show doing research Lynn found out many things about elephants that she did not know before writing her novel, the research also included a personal “get to know” with one of these might beasts. 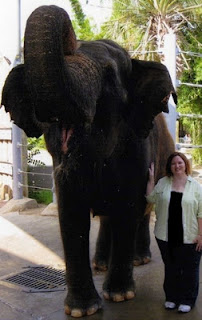 Sscientists recently discovered that there are three species of elephants, not just two. (One in Asia, two in Africa.) African forest elephants are much smaller than their neighbors in the savannah, and the two African species are as different as tigers and lions.

A long-distance call: some sounds elephants make are too low for you to hear even if you're standing nearby, but an elephant two miles away will hear them

The resulting book “Chained” has been worth all the research, receiving some great reviews..

“…a story that unwraps the heart and asks it to be brave, loyal, and above all, kind.”
~ Kathi Appelt, Newbery Honor winner and New York Times bestselling author of The Underneath and Keeper.

“…It doesn’t matter if Kelly is writing about about gentle giants, adults who have made mistakes, people left without choices or boys who rise to their own occasion, she has a talent for making the characters feel real and for making readers feel.”

The touching story of a boy and an elephant who have a friendship stronger than any lock, shackle, or chain.

Ten-year-old Hastin’s sister has fallen ill, and his family must borrow money to pay for her care in the hospital. To work off the debt, Hastin leaves his village in northern India to work in a faraway jungle as an elephant keeper. He thinks it will be an adventure, but he isn’t prepared for the cruel circus owner. The crowds that come to the circus see a lively animal who plays soccer and balances on milk bottles, but Hastin sees Nandita, a sweet elephant and his best friend, who is chained when she’s not performing and punished until she learns her tricks perfectly. With the help of Ne Min, a wise old man who seems to know all about elephants, Hastin protects Nandita as best as he can. Still he wonders–will they both survive long enough to escape?

As we learned during the show, Lynne is already hard at work on her next book a YA novel, with a more humorous touch “Reasons for Leaving” about a hitting the road to find a long lost friend, when all you want to be is safe at home.

So listen now and share an interesting, and entertaining show as I chat with my special guest today on A Book and a Chat with Lynne Kelly

You can find out more about my guest and their books at:
"Lynne Kelly - Chained"