A Book and a Chat with Lauren Carr 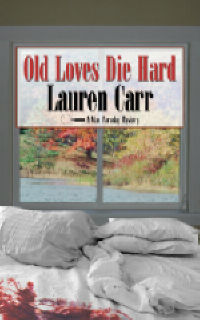 My guest on today’s “A Book and a Chat” fell Lauren Carr fell in love with mysteries when her mother read Perry Mason to her at bedtime. As she shared with us, her mother thought that no book was worth reading unless there was a body or two in the plot.

She worked as an editor with the federal government, and while there read a book from the library on how to write a screenplay. Using the instructions in this book, she wrote a screenplay and sent it to a literary agent listed in the back of the book. This was the early 1990’s before Internet. Well, a couple of weeks later, she had an agent. Less than a month after that, my screenplay was at Universal Studios with an actor (who I will not name since he dumped her) and a producer who want to make my screenplay into a pilot for a television series.

“That was easy”… or so she thought.

The actor dropped the project for a better offer elsewhere; and the promised pilot collapsed. her agent shopped the screenplay elsewhere and said everyone loved the script, but no one wanted to take a chance on an unknown.

So Lauren dropped the agent and began writing.

Her first two mystery books were the start of the Joshua Thornton Mystery series, “A Small Case of Murder” and “A Reunion to Die For”.

"Joshua Thornton is a hero most sublime, and his five children provide the perfect backdrop for a man searching for the next plateau. Chester, West Virginia is every town, and its inhabitants are fun and pivotal to the plot. “

These have now been followed by a two books in the Mac Faraday Mystery series firstly “It’s Murder, My Son” and now her second book in the series ”Old Loves Die Hard”.

What does a homicide detective do with all his spare time when he comes into a multi-million dollar inheritance and a luxurious estate on Deep Creek Lake? If you’re Mac Faraday, you pursue the lifestyle of a millionaire playboy between solving mysteries.

In Old Loves Die Hard, Lauren Carr continues the rags-to-riches story of Mac Faraday, an underpaid homicide detective who inherits two-hundred-and-seventy million dollars and an estate on Deep Creek Lake, Maryland, from his birth mother on the day his divorce becomes final.

Carr placed the Mac Faraday mysteries on Deep Creek Lake, where she and her family often vacation, because the resort area struck her as the perfect location for a detective. “Deep Creek has everything I love to find in a mystery,” Carr says. “From a diversity of characters to locations either up on the mountain or down on the lake. Deep Creek has it all.”

After years of working as an editor in Washington, Carr gave up life in the big city to return to small town life and her native West Virginia. “I love a good mystery,” said author Lauren Carr. “Growing up in a small community, an argument at the corner store can become a murder by dinner. Making the story a reality on paper is a real thrill.”

In Old Loves Die Hard, Carr picks up where she left off in It’s Murder, My Son. Mac Faraday is settling nicely into his new life at Spencer Manor when his ex-wife Christine shows up—and she wants him back! Before Mac can send her packing, Christine and her estranged lover are murdered in Mac’s private penthouse suite at the Spencer Inn, the five-star resort built by his ancestors.

The investigation leads to the discovery of cases files for some of Mac’s murder cases in the room of the man responsible for destroying his marriage. Why would his ex-wife’s lover come to Spencer to dig into Mac’s old cases?

With the help of his new friends on Deep Creek Lake, Mac must use all of his detective skills to clear his name and the Spencer Inn’s reputation, before its five-stars—and more bodies—start dropping.

With more books on the way, the name Lauren Carr will soon by now mystery to detective story readers.

So listen now and share an interesting, and entertaining show as I chat with my special guest today on A Book and a Chat with Lauren Carr

You can find out more about my guest and their books at:
"Lauren Carr - Old Loves Die Hard"