A Book and a Chat with Caroline Starr Rose 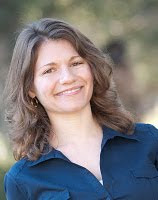 My guest on today’s “A Book and a Chat” is Caroline Starr Rose, teacher poet, member of the Class of 2K12 and now author. Caroline was an avid reader while young, and as we heard, also put on “magic shows” as “Caroline the Great”. She spent her childhood in the deserts of Saudi Arabia and New Mexico, camping at the Red Sea in one and eating red chili in the other.

She’s taught both social studies and English in New Mexico, Florida, Virginia, and Louisiana. In her classroom she worked to instill in her students a passion for books, the freedom to experiment with words, and a curiosity about the past.

She also spent some time in her teens in Australia as an exchange student, camping in the Outback, climbing Ayers Rock, holding a koala, and getting bitten by an emu. Of course from her stay in Australia, we could also discuss the virtue of Marmite over Vegemite.

Along the way Caroline has shared her love for poetry with many students in many forms, including dressing up as a character from the planet Zircon.
She started writing seriously about ten years ago, at first trying her hand on an historical novel about the Oregon trail, which though something that might never see the light of day, she found to be a good learning curve that has eventually lead to her debut YA novel “May B”. 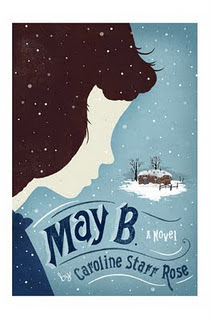 Mavis Elizabeth Betterly, or May B. as she is known, is helping out on a neighbor's Kansas prairie homestead, “Just until Christmas,” says her Pa. Twelve-year-old May wants to contribute, but it's hard to be separated from her family by fifteen long, unfamiliar miles.

Then the unthinkable happens: May is abandoned to the oncoming winter, trapped all alone in a tiny snow-covered sod house without any way to let her family know and no neighbors to turn to. In her solitude, she wavers between relishing her freedom and succumbing to utter despair, while trying to survive in the harshest conditions. Her physical struggles to at first withstand, and then to escape her prison is matched by tormenting memories of her failures at school. Only a very strong girl will be able to stand up to both and emerge alive and well.

In this debut novel written in gripping verse, Caroline Starr Rose has given readers a new heroine to root for, one who never, ever gives up.

The book is written in verse a form that helps move the story along as well as making the reader feel even more part of the reading, as one reviewer put it, “It made me feel as if I was in the snow storm.”

Caroline’s journey to publication from a start where she had several offers for her book, was not a smooth one, when her first publisher closed just as her book was planning to be launched, however lucky enough another publisher picked up “May B”, though this did mean several more rounds of editing. The result however is well worth waiting for, “May B” which is officially released on January 10th 2012.

“Heroes come in all sizes; my newest hero is a pint-sized girl named May B. Caroline Starr Rose tells May's story in simple, moving verse that captures the joy of family, the gloomy isolation of a dirt soddy, and the determination of one scared but indomitable young person. May B. is a girl you'll be proud to know. “

In “May B” we have Laura Ingalls Wilder–inspired ode to the human spirit who is a brave, stubborn fighter, written in beautiful and riveting verse.

This book is book for all, and certainly one to use those to add to your reading wish list for 2012.

So listen now and share an interesting, and entertaining show as I chat with my special guest today on A Book and a Chat with Caroline Starr Rose

You can find out more about my guest and their books at:
"Caroline Starr Rose - May B"

Email ThisBlogThis!Share to TwitterShare to FacebookShare to Pinterest
Labels: 2012 debut author, 2K12, A Book and a Chat, Barry Eva, Caroline Starr Rose, debut YA author, little house on the prary, May B, verse